Promising Press Statement 3yo Toomuchtobear (NZ) is city-bound after breaking his maiden at Bendigo on Thursday.

Winning jockey Damian Lane claimed a change of tactics and the addition of blinkers made all the difference in the Budget Car Rental Plate (1400m).  Stewards were advised the gelding would be ridden more positively and Lane followed those instructions by sitting on the speed before thwarting the challenge of Lindsay Park galloper Mr Brightside.

“The blinkers switched him on and it worked out perfectly,” Lane said.  “I did a lot of work on him early doors and he’s always been a lovely type.  It took a while for the penny to drop but now he’s learning how to use all that ability.

“I have a good opinion of him and he can go on and win more in town.”

Toomuchtobear had been placed in his first three starts for trainer Chris Waller and a syndicate headed by leading owner Nev Greenhalgh.  Magic Bloodstock’s Peter Tighe, who managed Waller’s world champion Winx, is also in the partnership.

Waller and agent Guy Mulcaster bought Toomuchtobear for $120,000 at the 2019 NZB Karaka Yearling Sale.  He was offered by Carlaw Park’s Nick Fairweather who had pin-hooked him as a foal for $85,000 from Hawera breeder Dan Myers

“I loved his walk,” Fairweather recalled.  “He looked a stylish colt with lots of room for improvement.”

Myers had purchased Bearish in foal to Press Statement for $35,000 at the 2017 Magic Millions National Sale.  “We brought her home and, right from the start, the foal had an amazing temperament and I mean amazing,” Myers said.  “He handled everything brilliantly and it was obvious he had plenty of scope and potential.”

Toomuchtobear commenced July on a winning note for Press Statement and the Vinery sire had a similar start last month with a half-dozen winners in the first week of June.

His filly Lady Tabloid won on debut for Nick Olive and she was followed in quick succession by Toretto (Matthew Dale), Confessed (Kris Lees), Winston (NZ) and stablemates Oakfield Blackhawk and Oakfield Arrow who doubled up for owner Bruce MacKenzie and trainer Kristen Buchanan. 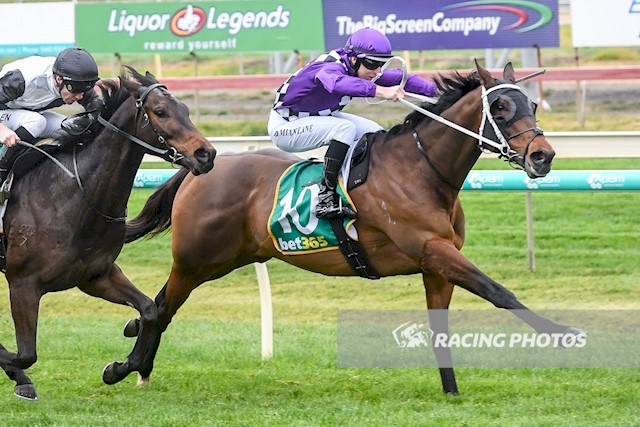