Imperial Hawk (Aus) is on the way to bridging the gap between restricted company and black-type staying events for Chatswood Stud stallion Purrealist.

The Kiwi mare is a last-start winner of the Bayleys Real Estate Hcp (2100m) at Tauranga and that caused connections to consider setting her for races like the Rotorua Cup and Hawkes Bay Cup.

Imperial Hawk is a homebred for Australian based David Puglisi in partnership Tony Muollo and they sent her across the Tasman last October.  She began her career in Australia and the best of those three runs was a placing at Kembla Grange.

A stakes career isn’t out of the question for the lightly-raced four year-old who is now under the care of Murray Baker & Andrew Forsman at Cambridge.  She’s a younger sister to G1 Queensland Derby winner Hawkspur who has trained on for the last two editions of the G2 Chelmsford Stakes at Randwick.

“She does have a very good sprint when held up for one shot at them,” Forsman said.  “We’re not afraid to look at some bigger targets for her over the next two months.”

Imperial Hawk (4m Purrealist – Mollyhawk by Catbird) lengthened stride impressively to forge away to a decisive victory a three quarters of a length victory on March 21.  She can continue on an upward curve in the First Credit Union Hcp (2200m) at Te Aroha on Easter Saturday.

Purrealist (Tale of the Cat) won the G3 Caulfield Guineas Prelude for Tony Santic and Puglisi before retiring to Makybe in 2008.  He transferred to Chatswood in 2012.

“I’m a retired tuna fisherman – just like Tony – and call myself a professional breeder or something like that now,” Puglisi laughed.  “My wife Lynlea and I just follow the horses around and we’ve had two running at the elite level – Hawkspur and Arinosa – we’re blessed.” 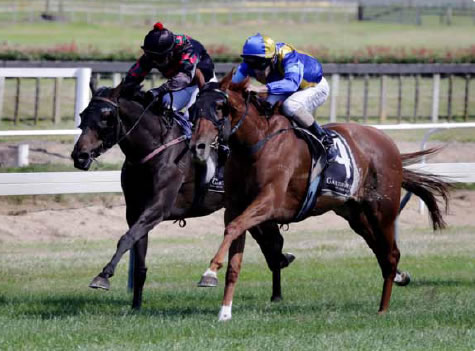