Imported mare Belfast Bella (Fr) could be one to follow through the grades as she acclimatizes in Australia.

The Arqana Sale graduate dispatched a field of maidens with a powerful finish to the William Farrer Hotel Hcp (1400m) at Wagga on Sunday. Apart from some crowding on the corner, it was a trouble-free, four-length victory at just her second start out here.

Belfast Bella was purchased by Sheamus Mills Bloodstock (FBAA) for €35,000 (AUD 54,250) at the Arqana Breeding Sale last December on behalf of the Gold Class Racing syndicate which is managed by Sue McGuinness.

“She’s thriving but is still raw,” trainer Matt Dale said after the eye-catching victory. “Sunday’s win was a significant improvement from her first start last month and we will keep stretching out over longer distances. Obviously, I would like to see her stay in training instead of going straight to stud.”

Belfast Bella will be a five year-old on August 1 in Australia but in real time has only just turned four. The best of her four starts in France was a second over 2200m at Chantilly in May last year.

Mills purchased her from Lady O’Reilly of Haras de la Louvière and she was the cheapest of his half-dozen buys at the Arqana Sale. By European Horse of the Year Manduro (Ger), she hails from the Monsun sireline that has given us Melbourne Cup winners Almandin and Fiorente.

“Belfast Bella is an example of what I look for at the European bloodstock sales,” Mills explained. “Flipping through the catalogues, you find pedigrees that are familiar to an Australian audience and that’s important to my clients who are commercial breeders.

“We brought her back home in February and decided to give her a try with the stud season six months away. They said she had some back issues but our chiropractor couldn’t find anything wrong.

“Straight after her first gallop, Matt rang up and she was pretty good. And she loves the beach down at his stables in Moruya.”

Mills is confident of another good result with Sue McGuinness and Gold Class Racing. They have already combined to improve the stud prospects of mares like Chaquinta and Rocket Commander.

Chaquinta (High Chaparral) completed a city hat-trick at Warwick Farm before going to Choisir last September. And Rocket Commander (Court Command) won a G3 Wenona Girl Hcp before she was sold to Rob Crabtree for $280,000 at the 2017 Magic Millions National Sale.

“Sue has been a good-luck charm for me and hopefully Belfast Bella keeps it going,” Mills continued. “We can give her another couple of runs before making a decision on whether to send her to stud. But if she improves off the Wagga win, that would be highly unlikely.” 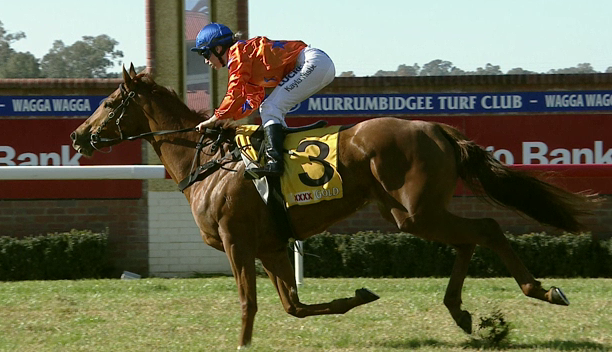