Michael Pitman’s prayers for a good track at Royal Ascot were answered ahead of the King’s Stand Stakes Gr.1 tonight.

The NZ trainer’s Group 1 winning sprinter Enzo’s Lad excels on a hard surface and bright, sunny conditions with a strong breeze have prevailed in Berkshire since the weekend.

Enzo’s Lad is one of the outsiders for the opening day’s feature event which will be contested over 1000m down the straight at 12.40am on Wednesday morning (AEST).  “I hope the track is like concrete,” Pitman said.  “It would be extra special to get a Royal Ascot winner.  You may only get one crack in a lifetime.”

Conceived at Vinery Stud, he is by Testa Rossa from Sheerama (Catbird) who is a half-sister to Schillaci Stakes Gr.2 winner Patpong.  He made $15,000 at the 2014 Magic Millions National Yearling Sale and has earned over $393,000 which would convert into seven-figures if he was based in Australia.

“Even though he is by Testa Rossa, whose progeny probably don’t mind a bit of moisture, he prefers a firm track,” Pitman claimed.  “We decided on the trip to England after he won a second (Gr.1) Telegraph Hcp at Trentham earlier this year.”

Enzo’s Lad is stabled with Jane Chapple-Hyam at Newmarket and pleased in two hit-outs on the Al Bahathri gallops last week.  “I didn’t time him, but he seemed to be enjoying his work.  We’re fully aware he one of the outsiders in the King’s Stand but he won two Group 1 races in New Zealand at long odds.  We don’t look at the tote, we just worry about our horse.

“It’s a massive journey into the unknown but we’re just worrying about having our horse right on the day, and we think he will back up well in the Diamond Jubilee on Saturday.

“I stay awake and watch Royal Ascot every year and love its history.  It’s the best week of racing in the world and to be part of it is simply a dream come true for me – it’s the absolute pinnacle.”

It would also cap a wonderful stud career for Testa Rossa who is also a chance of slotting into the $14 million The Everest at Randwick on October 19.  Leading Perth owner Bob Peters has transferred Enticing Star to Chris Waller and he is currently in preliminary discussions with slot holders.

Enticing Star has won 8 of her 10 starts and was last seen finishing second to Voodoo Lad in the Winterbottom Stakes Gr.1 at Ascot.

Testa Rossa sired her from Favourite Star (More Than Ready) who is closely related to Group 2 winners Perfect Jewel (WA Guineas) and Star Exhibit (Perth Cup).  Peters bought into the family at the 2001 Inglis Easter yearling sale when he purchased their second dam Lady Ashford (Royal Academy) for $130,000 from Vinery. 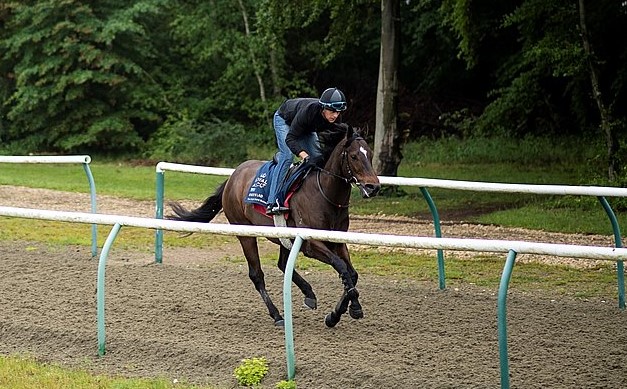