More Than Ready champion Rushing Fall gave a stellar field of mares a masterclass in the Diana Stakes Gr.1 at Saratoga on Sunday.

Runner-up to stablemate Sistercharlie in last year’s Diana, she ranged up to Mean Mary (Scat Daddy) in the straight and then put her signature turn of foot to good use to win by a neck over 1800m on turf.  “She’s very special,” said trainer Chad Brown who was winning the Diana for the fifth year in a row.  “She’s a horse of a lifetime for anybody – for an owner, for a trainer, for racing.

Rushing Fall (5m More Than Ready – Autumnal by Forestry) is unbeaten this year after victories in the Beaugay Stakes Gr.3 at Belmont Park and Jenny Wiley Stakes Gr.1 at Keeneland.  She has won 11 times in 14 starts for earnings of $2.55 million.

The Vinery legend’s daughter is in rarefied air as a Group 1 winner in four straight seasons, dating back to her victory in the Breeders’ Cup Juvenile Fillies Turf in 2017.  There is very little missing from her résumé apart from an Eclipse Award as Champion Female Turf Horse but winning the Diana will go a long way to achieving that honour this year.

Jockey Javier Castellano said the plan was to lead until Mean Mary took over in front.  “I tried to ride smart and save something for the end.  She’s very tactical.  She doesn’t have to be on the lead, she can come from behind and when I asked her, she responded.”

Rushing Fall was bred by Fred Hertrich and John Fielding and was a $320,000 purchase for owner Bob Edwards at the 2016 Fasig-Tipton Saratoga Yearling Sale.  “We’re very fortunate Bob put her back in training this year,” Brown said.  “She’s worth a lot of money and he could easily have sold her as a broodmare.

“We sent her down to Stonestreet in Florida like we do every winter where they do a fantastic job and then my team got a hold of her and took it from there.  They executed like they always have, and she has really come through.”

Brown and Edwards have yet to decide what race Rushing Fall will target at the Breeders’ Cup Championships at Keeneland in November.  She can stick to her own division in the BC Filly & Mare Turf (1900m) or she can take on males at her favourite trip in the BC Mile. 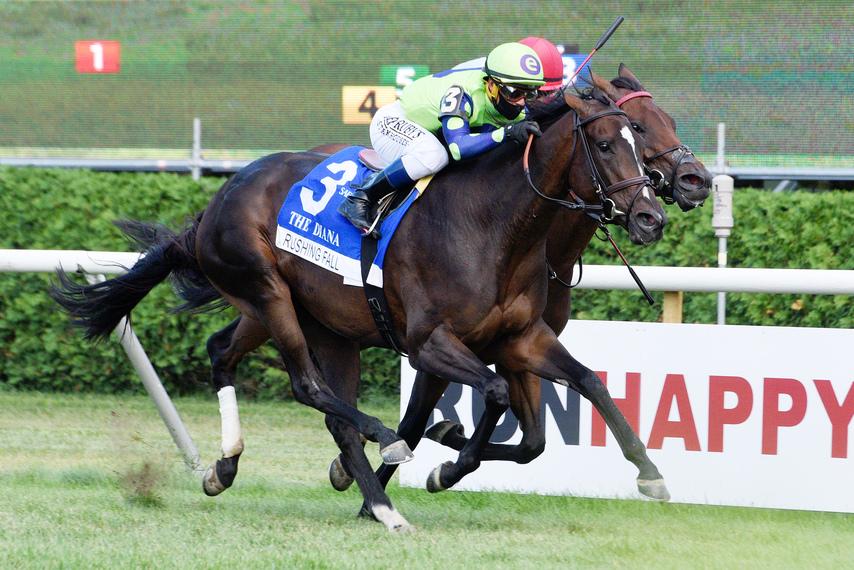