Scenic Lodge champion Snippetson has sired his second Saturday double in a row at Belmont with Snippy Miss and Vane Tempest.

Snippy Miss was winning for just the second time in 26 starts for trainer Adam Durrant but she’s been a bridesmaid 10 times since her only other win at Belmont in June 2019.  The 4yo mare’s regular jockey Clint Johnston-Porter decided to take a punt and take the lead from a sticky gate in the TABtouch Westspeed Platinum Hcp (1200m).

“She has been frustrating but always tries her little heart out,” Johnston-Porter said.  “That wasn’t the plan to go to the front but she jumped well so I tried something different.”

Vane Tempest has a much better strike rate winning 5 times in 10 starts for Scenic Lodge founder David Smith and trainer Paige Kenney.  She was backing up from an unlucky second to Timely Outburst and was too good for a strong field of sprinters in the Vale Paul Stillitano Hcp (1000m).

“She’s genuine but after last week we decided to add a lugging bit and claim 3kg with Victoria (Corver),” Kenney said.  “She travelled strongly but I was a bit worried she may have gone too early.  There were a few swoopers in the race but she was good enough to hold on.”

Snippetson sired Vane Tempest from Quantum Leap (Regal Classic) and the 3yo filly is a half-sister to Melbourne stakes winning brothers He’sfantastic and Outlandish Lad.

His first Belmont double this month was with Sunnysilk and Tinsnip on June 19.  His beautifully-bred 3yo filly Poker Face also weighed in after winning her maiden at Pinjarra on Thursday.

Poker Face is a stablemate of Vane Tempest and both fillies will be valuable additions to the broodmare ranks at Scenic Lodge.  Poker Face is a younger half-sister to Karuta Queen who won a RL Magic Millions 2YO Classic on the Gold Coast and G3 Australia Stakes at Moonee Valley. 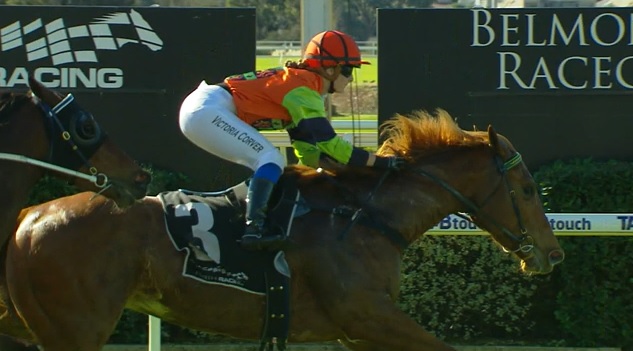