European breeders raved about the first foals by Toronado earlier this year and their Australian counterparts have echoed those sentiments now that his southern foals are arriving en masse.

Toronado (Ire) is an outstanding physical specimen and shuttles from the English National Stud to Adam Sangster’s Swettenham Stud in conjunction with Al Shaqab Racing.

A Champion Group 1 Miler, he covered 174 mares at Nagambie last year and among the first to foal was Riverina Red (Testa Rossa).  Her Toronado filly was born at Riversdale Farm on August 1.

“She is a first foal and was boxed for a week to strengthen,” studmaster Nick Hodges explained.  “Adam inspected her while up here recently for the Hunter Valley stallion parades.  She’s a forward-looking filly with a big backside and has really come on in the last few weeks.”

Riverina Red was a 2yo placegetter at Flemington and is owned by Swettenham client John Connellan who has raced class stayers like G2 Herbert Power Stakes winner Yakama (Umatilla).

Irish-bred mare Namurian Sunset foaled one of the first Toronado colts at Tyreel Stud in NSW.

Namurian Sunset (Thousand Words) won at Gowran Park for trainer Paddy Prendergast and was purchased straight off the track for 60,000gns (AUD 120,435) at Tattersalls.  She is a half-sister to Group 1 racehorse and sire Ransom O’ War and is owned by Victorian breeder Geoff Russell.

“We would recommend Toronado to any breeder on the strength of this colt.  He’s a belter.”

Among the Victorian farms with Toronado foals on the ground is Glenelg Park in the Balmattum Hills just outside Euroa.

Studmaster Danny Swain welcomed an early filly out of Scarlet Moretta (Fastnet Rock).  “She’s a first foal and isn’t overly big,” Swain said.  “But she’s a ball of muscle and is a very strong filly.”

Scarlet Moretta won a Sale juvenile on debut and was also successful at Morphettville for trainer Phillip Stokes.  She hails from a French Group 1 winning family developed by Daniel Wildenstein was sold as a broodmare prospect for $87,5000 at the Inglis Great Southern Sale last year.  Agent Adrian Hancock was acting for Adelaide breeder Harry Perks.

There’s another half-dozen foals at home base in Nagambie.  “Toronado is certainly stamping them with great bone, muscle and athleticism,” Swettenham’s marketing manager Rachel Spriggens said.  “He has that X Factor every stud looks for in a stallion.”

Among the new arrivals is a colt from Circus Polka. She is a Stravinksy half-sister to G1 Champagne Stakes winner Prized Icon who is gunning for a Group 3 in the Gloaming Stakes at Rosehill this Saturday.

There’s an eye-catching filly out of Noetic (Cape Cross) at Swettenham.  Her dam earned minor black-type at Flemington and is from the immediate family of Champion USA Sprinter Housebuster.

“Toronado will cover another strong book of mares this season,” Spriggens confirmed.  “There’s a significant number of mares revisiting him on the strength of his first foals and we have limited spots available at $22,000.” 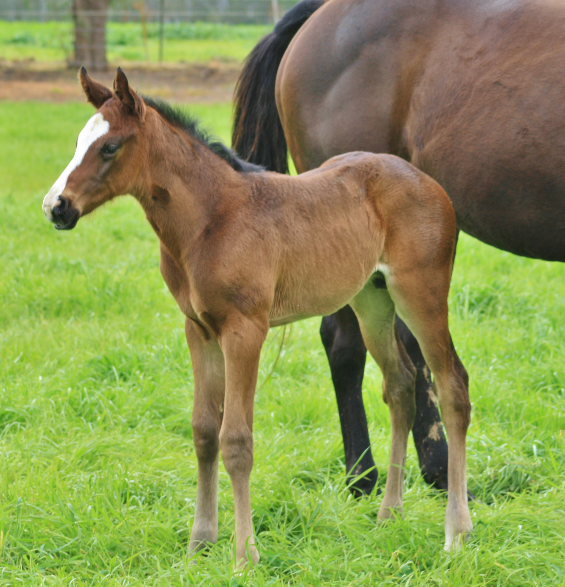