In-form Oakland Park resident Sessions sired a double at Belmont on Wednesday to increase his individual winner count to six in the last month.

All bar one have been at Belmont and that’s put the WA second-season premiership to bed for 2019-20.  He’s also bubbling just under the Australian Top 10 in that divisionwith earnings of $1.31 million.

Paris Report (3f Sessions – Paris Cracker by Viscount) filled out the Belmont double with a half-length victory over Showzali (Showcasing) and Ohbeeh (Sessions).  She’s an Oakland Park homebred and the first-up win was her third in 8 starts.

“She missed a trial and there was a query fitness-wise but class carried her through,” trainer Dan Morton said.  “I guess she was vulnerable fresh and she should only improve off today’s run.”

Paris Report is a half-sister to the Rogano city winners In Love With Paris and Catherine Wheel.  Second-dam Paris Petard (Mujahid) won the G3 WA Sires’ Produce Stakes in 2006.

“Dan didn’t want me on the speed so we sat fifth and sixth,” jockey Chris Parnham said.  “She’s on the small side but covers plenty of ground and gave me a nice feel in running.”

Playing God has risen to a WA high $13,200 service fee this year while Oakland Park owner Neville Duncan has gone the extra yard to ensure a large book for Sessions by slashing his service fee by 30% to $3,850 (inc GST).

The reduction is also in response to the 20% cut in prizemoney announced by RWWA in the wake to COVID-19. 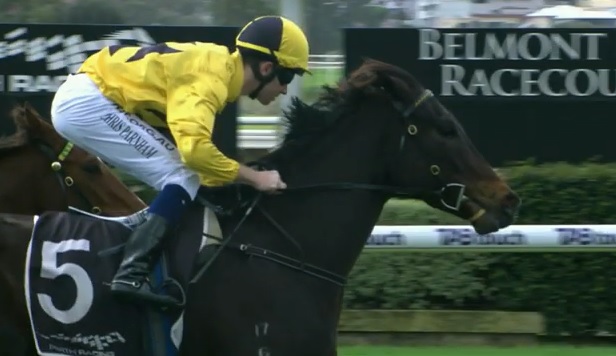