More Than Ready import Renaissance Art broke through for his first Hong Kong victory in the Citibank Loans Hcp (1600m) on Sunday.

Renaissance Art (4h More Than Ready – Lady Siphonica by Siphon) had arrived from Ireland with big wraps but had been unplaced in his first two runs in the Far East earlier this year.  “That was a good effort,” Fownes said.  “He’s going to keep progressing and in time I think he will make a nice stayer.”

Bred in Kentucky, Renaissance Art is from a winning sister to G1 Hollywood Futurity winner Siphonic and he defeated subsequent G1 W S Cox Plate winner Adelaide on debut at the Curragh in the June 2013.

Irish master Jim Bolger brought him back for a classic campaign last year but he was sidelined after finishing fourth to Adelaide in the G3 Gallinule Stakes back at the Curragh in May.

Renaissance Art (USA) was subsequently sold to the Hong Kong Pegasus Racing Syndicate.  “The key was getting up to a distance where he was going to be a little bit more comfortable,” jockey Zac Purton said.  “I think he could develop into a nice horse.”

The Hong Kong result followed another winning weekend for More Than Ready in Australia.  The Vinery champion sired his 136th and 137th stakes winners on Saturday with Always Allison (G2 Sweet Embrace Stakes) in Sydney and Haybah (LR Cinderella Stakes) in Adelaide. 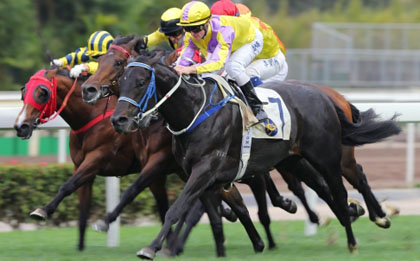