All Too Hard flew the Vinery flag on two fronts in Queensland on the weekend starting with a record-breaking victory at Doomben on Saturday.

Consistent mare Sky Lake sent All Too Hard through 400 career wins on Saturday and it got even better when Alligator Blood bolted in at the Sunshine Coast on Sunday.

All Too Hard has now sired 174 individual winners of 402 races in his first three crops at an elevated 63% strike-rate.  And he’s currently in the Australian Top 5 for winners and Top 10 for prizemoney!

Sky Lake timed her finish perfectly to nail grey mare Time To Play by a nose in the Herron Todd White Hcp (1350m).  “She pinned her ears back and got there right on the line,” trainer Chris Munce said.  “She’s won 4 times in just 13 starts since joining our stable and it was a top ride by Michael Murphy.”

Munce prepares her for a syndicate that includes Bill Andrews who races recent Memsie Stakes winner Scales Of Justice.  “Obviously, Group 1 races are great but seeing Sky Lake win in the city is also a real boost,” he agreed.  “And her record could be even better because she has been unlucky.”

Sky Lake was purchased as a yearling for $100,000 at the 2016 Magic Millions National Sale.  She is the final foal of Dane Ripper Quality Gr.3 winner Vietnam (Admiralty).

Alligator Blood is ready to return south for the spring carnival after using the TAB Plate (1400m) as an exercise gallop on Sunday.

The unbeaten son of All Too Hard won by three lengths against older horses without being extended by jockey Jake Bayliss.  He was backed in from $1.40 to $1.22 and the result was never in doubt once he dropped front-runner Bastia in the straight.

Alligator Blood earned an initial trip to Sydney after winning first-up at Doomben in August.  He was all set to run in the Ming Dynasty Quality Gr.3 at Rosehill a fortnight ago but became agitated in the race day stalls and was a late scratching.

Trainer David Vandyke confirmed his next start would be the Caulfield Guineas Prelude Gr 3 on September 29 ahead of the Caulfield Guineas Gr.1 on October 12.  “He came back home with a minor leg abrasion,” Vandyke reported.  “But I was confident, all going well, that we would be heading back for another crack.” 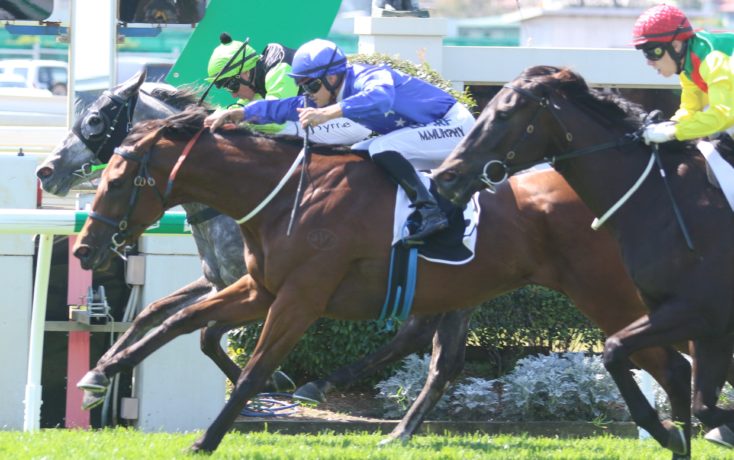