Snippetson’s current 3yo crop will play a key role in keeping him at the top of the WA active sires’ premiership in 2020-21.

The Scenic Lodge resident has Magic Millions 2yo Classic winner Gemma’s Son back in training with David Harrison for a tilt at the G1 Winterbottom Stakes (1200m) at Ascot.  He garnered $452,200 in prizemoney last season and Perth’s premier sprint on November 28 is worth $1 million.

Snip’N’Tuck looks a money-spinner in the 3yo ranks on the strength of her victory in the Tom Cullen Memorial (1617m) in Kalgoorlie last Sunday.  She went forward and pressured front-runner Pumphrey’s Bridge approaching the home turn before pinching a winning break in the straight.

“She broke through having just her fourth start and beat the older horses in what was a fair effort for a young horse,” trainer Adam Durrant noted.  “She will definitely get over further with maturity.

“Bred and raced by Dave, Sunny & Brad Elsegood, she is yet another winner out of Mabel Grace and what a fantastic mare she has been for connections.”

Mabel Grace is also the dam of Tinsnip who won the G3 WA Sires’ Produce Stakes for Snippetson, Durrant and the Elsegoods in 2019.  Her 2yo filly by Rogano is also with Durrant and she has been named Harmika.

Pearce Racing unveiled another smart Snippetson 3yo at the Lark Hill trials on Monday.  Their filly Le Choix looked readymade winning over 950m for Joe Azzopardi after jumping and sitting pretty behind the speed.

Le Choix sold for $62,500 at the 2019 Perth Magic Millions.  Her dam Jester Derriere (Patronize) is a half-sister to Magic Millions 2yo Classic winner The River.

Scenic Lodge stands Snippetson and Universal Ruler for $6,600 with Dash For Cash at $2,750.  (Fees inc GST) with a free return. 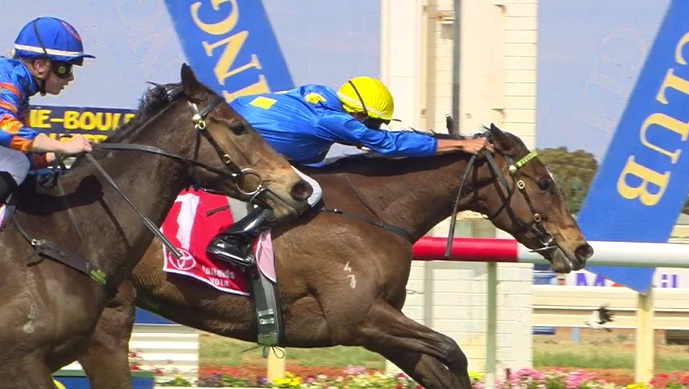