Press Statement mare Kitty Cat Chat lost her unbeaten record when racing first-up at Kenilworth last month but she was back to her very best winning the Southern Cross Stakes (Gr.2, 1000m) on Saturday.

Kitty Cat Chat led at every call down the straight course to defeat quick-closing stablemate Capitana (Captain Al) on the opening day of the summer season in Cape Town.  The Brett Crawford-trained pair race in the colours of the Kieswetter family who own Ridgemont Stud.

“They’re two fine mares and it was a super result for the team,”  Crawford said.  “To have Kitty Cat Chat and Capitana run first and second in this premier sprint is a credit to Ridgemont and it’s good to have Craig, Ross and Belinda Kieswetter on course today.”

Sporting Post reported Kitty Cat Chat clearly held the speed edge over the minimum trip.  She jumped smartly and stable jockey Luyolo Mxothwa did some astutely calculated tactical low-flying on the speed queen into the teeth of a headwind.

Kitty Cat Chat was unbeaten in three starts last season and Crawford confirmed things went awry when she failed following an extended spell on November 3.  “There were excuses with her prep and nothing went right.  That wasn’t the real Kitty Cat Chat.  She had been working well at home and was always going to be competitive today.”

Bred by Ridgemont in Australia, she’s from the first crop of Vinery Stud’s dual Group 1 winner Press Statement out of Whats New Pussycat (Fast N Famous) who was subsequently sent to South Africa prior to another move to the Kieswetter’s Irish base at Barnane Stud.

Ridgemont won the 2021 Cape Flying Championship Gr.1 with Australian-bred mare Run Fox Run (Foxwedge) and Kitty Cat Chat can make it a double in their Green & Blue silks at Kenilworth on January 29.

Press Statement filly Sneaky Starter has a $2million assignment on January 15 in the Magic Millions Classic (RL, 1200m) on the Gold Coast.

Sneaky Starter saluted for the second time in three starts at the Sunshine Coast on Saturday in the Tattersall’s Members Plate (1000m) sending her earnings to $77,900.  “She probably needs more prizemoney to make the Magic Millions field, but if you’re good enough, you’ll get it,” trainer Mick Mair said.  “I’ve had a big opinion of her and she hasn’t put a foot wrong since coming into the stable.

“I didn’t know how she’d handle the Soft 7 but apparently the Press Statements go all right on wet tracks.”

Sneaky Starter (2f Press Statement – You’re Funny by Congrats) is closely related to Group 1 Golden Slipper Stakes winner Ha Ha and was a bargain $15,000 buy for Mair out of Book 2 at the 2021 Gold Coast Magic Millions. 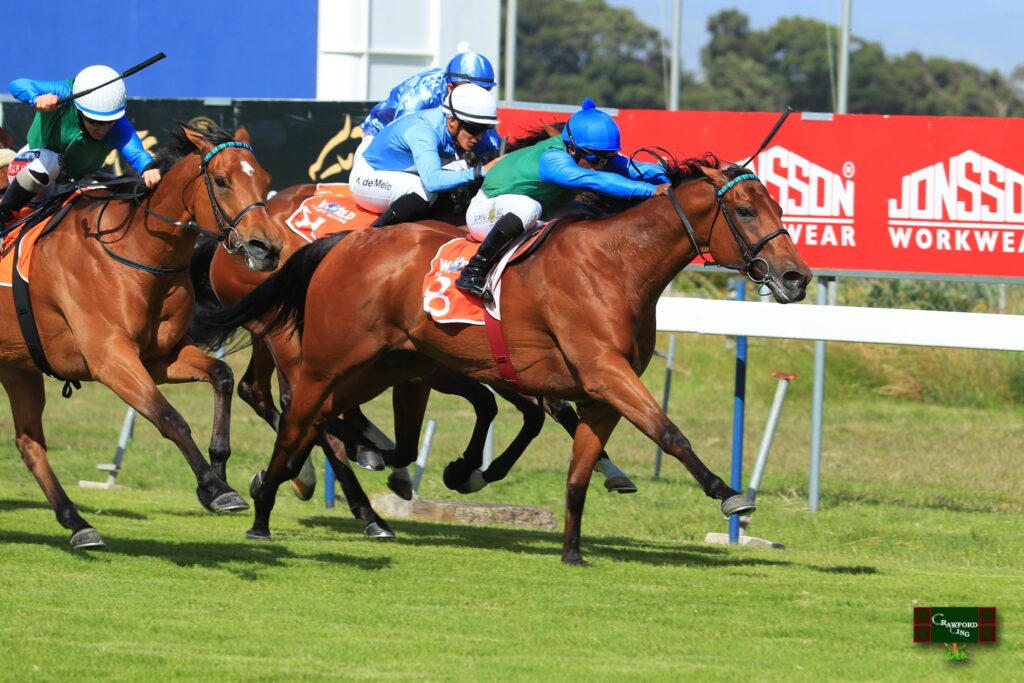