Sneaky Chance has been one of Perth’s most reliable horses in training and that consistency has paid off again in the Mrs Mac’s Hcp (1000m).

Benefiting from a rails-hugging ride by Shaun O’Donnell on Saturday, the 3yo daughter of I’m All The Talk took over from front-runner Warm ‘N’ Fuzzy (I’m All The Talk) at the furlong and had enough in reserve to defeat Vane Tempest (Snippetson) by a head.

Sneaky Chance failed to win in a half-dozen outings as a 2yo but did finish fourth, beaten a length, behind Ex Sport Man in the RL Magic Millions Classic (1200m) at Pinjarra.  She’s turned that around following successful throat surgery by Dr Peter Harding at Ascot Equine Vets and almost a year on the sidelines.  Since resuming with an Ascot win in March, she has registered 4 wins and 3 placings in 8 starts for trainer Trevor Andrews.

“Shaun gave her a good ride today,” Andrews said.  “We freshened her up but she didn’t leave the stable after her previous run behind Nowhiteflag last month.  We kept her up ticking over with some light work as well as the treadmill and she galloped really well on Tuesday morning.

“She’s eating up and is as sound as a bell.  Full credit to my wife Joanne for spoiling her rotten at home.  She’s enjoying her racing and will make a nice broodmare one day.”

Sneaky Chance earned $84,540 on Saturday which included a full Westspeed Platinum Bonus of $40,700.  Owned by a Joanne Andrews-managed syndicate that includes Perth Magic Millions manager David Houston, she will be eligible for a half Platinum Bonus for city sprint wins as a 4yo next season.

Bred and sold by Mungrup Stud for $42,000 at the 2020 Perth Magic Millions Yearling Sale, she is a half-sister to Sir Snugalot (Oratorio), a 7-time winner and $194,000 earner to date for trainers Simon Miller and Steve Wolfe.

Their dam Snuglet (Scenic) was purchased by Andrews for $4,750 at the 2020 Mungrup Stud Dispersal.  Her 2yo is an unraced Playing God colt named Our Nemesis and she has a weanling colt by the Andrews-trained G2 Karrakatta Plate winner Lucky Street. 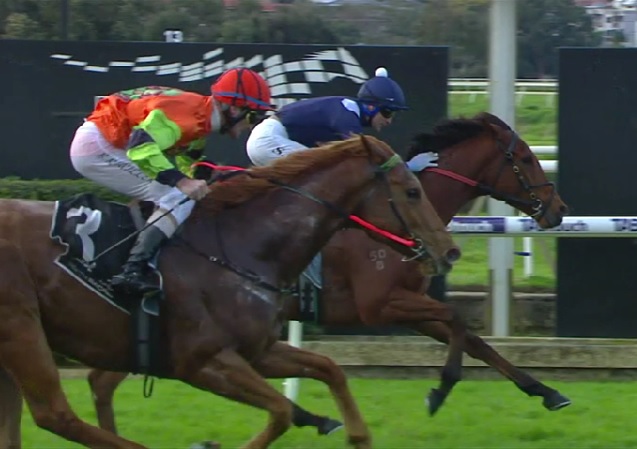