And fellow Vinery sire Myboycharlie can chime in with a Saratoga stakes winner when Euro Charline runs in the G2 Lake George Stakes (1700m) next Wednesday.

TULIRA’S STAR (2f Congrats – Tulira by General Assembly) scored by three lengths on debut at Arlington last month and the ease of that win prompted Irwin to make an offer that was accepted by her owner-breeder Curtis Green.

In 2001, Irwin bought Cashier’s Dream after a maiden win at Churchill Downs and she went on to win the G1 Spinaway Stakes at Saratoga.

Todd Pletcher trainee Fashion Alert (Old Fashioned) will start a short-priced favourite in the Schuylerville after a four-length winning debut in the Astoria Stakes at Belmont Park.  But her Beyer Speed Figure of 88 was equalled by Tulira’s Star at Arlington.

Congrats (A P Indy) has sired a string of precocious juveniles since his first-crop filly Turbulent Descent won the G1 Starlet Stakes at Hollywood Park.  His first Australian bred two year-olds will appear in 2014-15.

EURO CHARLINE (3f Myboycharlie – Eurolink Artemis by Common Grounds) will bring some serious European form to the Lake George Stakes.  She was runner-up in the G2 Nell Gwynn Stakes at Newmarket in April and then ran a cracking third to Rizeena in the G1 Coronation Stakes at Royal Ascot.

“Team Valor want her to be set for Saratoga,” trainer Marco Botti said after a top-class renewal of the Coronation Stakes.  “She will run for me in that race and will then stay over there.

Myboycharlie (Ire) sired his first Group 1 winner when Peggy Jean claimed the ATC Sires’ Produce Stakes at Randwick in April.  Vinery will stand him for a $13,200 (inc gst) fee this year. 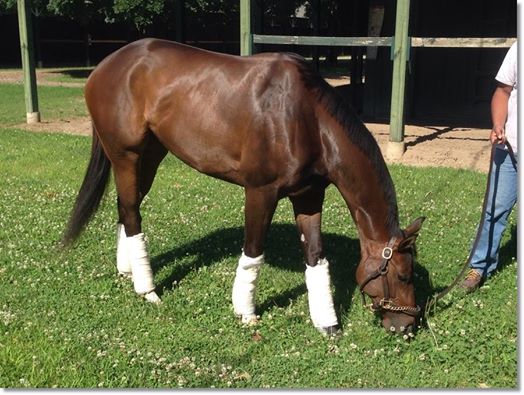