Group 1 sprinter Star Turn has 18 first-crop foals catalogued for the Magic Millions National Sale and vendors are arriving at the Gold Coast confident of a positive response from buyers next week.

Star Turn (Star Witness) covered 158 mares in his initial book at Vinery Stud after a 12-start career with Team Hawkes.  He drew first blood as a spring 2yo in the Pierro Plate at Randwick before returning as a 3yo with a dominant victory over Golden Slipper winner Capitalist in the San Domenico Stakes Gr.3.

Sent to Melbourne, he produced another brilliant burst of acceleration to win the Schillaci Stakes Gr.2 at weight-for-age against older horses and then signed off his spring campaign with an unlucky third in the Coolmore Stud Stakes Gr.1.

Vinery’s first Star Turn foal to parade is Lot 290, the colt from Madam Zara who is a half-sister to South African Group 2 winner Tamaanee.  “He’s from the same family as I Am Invincible and is like all the Star Turns I’ve seen at other farms,” Vinery’s Bloodstock Manager Adam White confirmed.  “Star Turn was an extremely good-looking horse so it’s no surprise to see him getting quality stock.”

The Star Turn – Sanaya filly (Lot 472) is from a three-quarter sister to More Than Ready’s Group 3 winner Mahisara.  “We are very happy with our Star Turn foals going to the Gold Coast,” White added.  “This filly looks an ideal yearling for the 2020 Magic Millions.”

Segenhoe Stud general manager Peter O’Brien is prepping a well-bred Star Turn – Circle Game filly (Lot 69) who is a three-quarter sister to multiple stakes-winner El Daana.  “She exudes quality and is a beautifully-balanced filly.  She’s a daisy-cutter and looks a readymade racehorse.”

Lime Country Thoroughbreds owners Greg and Jo Griffin have a Star Turn – Msongari filly (Lot 356) that’s the spitting image of her sire.  And she should come to hand early being a grand-daughter of Champion NZ 2YO Flying Babe.

“She has four white stockings and a blaze with plenty of bone,” Jo Griffin said.  “She’s mid-sized and strong with a well-balanced action.”

The Griffins are confident of a positive response following their two colts by Vinery sire Headwater that made six-figures during the Magic Millions Yearling Sale in January.

Rosemont Stud has Star Turn colts from Delirious (Lot 101) and Gracie Girl (Lot 190) for sale on Wednesday.  The latter is from an unraced half-sister to the dam of Vinery Stud Stakes Gr.1 winner Montoya’s Secret.

“The Delirious colt is a later foal and is a real good mover,” Rosemont manager Gerard Jones said.  “The Gracie Girl colt is bigger and well put together.”

“She’s a well-grown filly and is a half-sister to Jericho Missile who we sold at the 2017 Magic Millions Foal Sale.  He won the Perth Magic Millions 2YO Classic in February and buyers will like this filly.”

The Newgate foal consignment has already arrived at Stable E on the Gold Coast and manager Mary O’Neill expects the Star Turn colt to sell well after initial inspections on Friday. 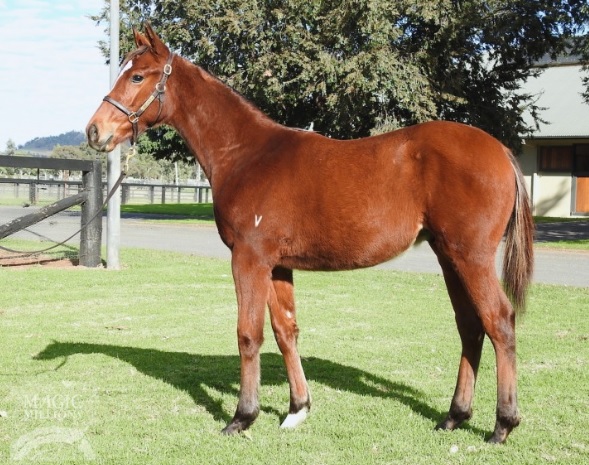