The 3yo pocket-rocket had put the writing on the wall with a flashing fifth in the Stradbroke Hcp (Gr.1, 1400m) a fortnight ago.  She was among the tail-enders again in the Tatt’s Tiara but jockey Jason Collett steered her through a packed field to score by a half-length from Snapdancer (Choisir).

Startantes is the fifth Stakes winner by Star Turn and her black-type breakthrough for breeder-owner-trainer Rob Heathcote comes after Group 1 placings in the Flight Stakes and Surround Stakes earlier this season at Randwick.

“She’s very special.  There’s not much of her but she’s got a big heart and massive will to win,” Heathcote said.  “She had no luck in Sydney and really deserved this one.”

Startantes is a third-generation winner nurtured by Heathcote and his wife Vicki.  They bred her by using Star Turn over their Champagne Classic Gr.2 winner Funtantes (Easy Rocking).  They also raced her second-dam Cantantes (Just Awesome) to wins at Eagle Farm and Sunshine Coast.

“It’s a fantastic family and we have some close friends in her from the days when I first started out.”  Among the part-owners is Rob Ciobo who was in their champion sprinter Buffering (Mossman).

“I thought she was pretty good when we just missed at Randwick but the feeling I got today was unbelievable,” Collett declared.  “When I pushed the button, her turn of foot was electric.”

Startantes is off to the paddock with a career stats of 6 wins in 19 starts for earnings over $890,000.  “She’s worth a few bob now and we did have those nice races for mares in mind at the Melbourne spring carnival,” Heathcote added.  “But we might have to think again because she hasn’t had a break during her last two preps.”

Star Turn (Star Witness) is finishing the season with a bang at home and abroad in the last month.  Cordyceps Six started the black-type rush in the Sha Tin Vase (Gr.3, 1200m) in Hong Kong last month and Golden Monkey added the Singapore 3YO Sprint (LR, 1200m) last weekend.

His Australian city winners in June, apart from Startantes, include Volonte (Doomben), Beads (Belmont) and Star Expresso (Morphettville) and they have helped increase Star Turn’s domestic tally to 40 individual winners of 61 races this season 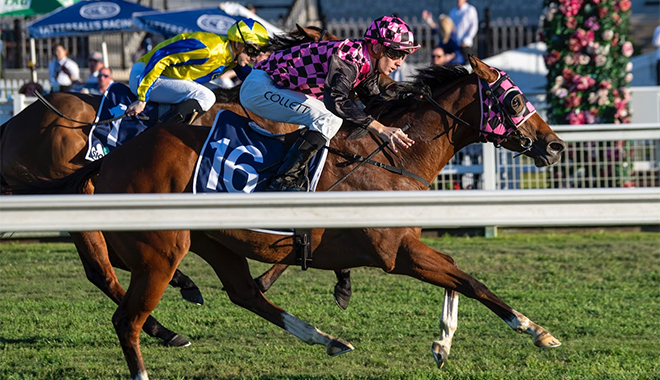