Playing God can put the icing on the cake of a calendar month to remember at Ascot on Saturday.

The Darling View Thoroughbreds champion has several winning chances headed by the Neville Parnham-trained Pray Again & Success Play (Race 3) and Pambella (Race 4).  The stable has been a strong supporter from the outset and kicked off April with his LR Old Comrade Stakes (1600m) winner Bruce Almighty.

It was Dan Morton’s turn the following Saturday when he claimed a classic with Playing God’s rising star Alaskan God in the G2 WATC Derby (2400m).

Swear To God (2c Playing God – Ora Miss by Oratorio) has talent to burn and that was evident when he picked up the leaders and then put them away in the Morley Growers Market Plate (1000m).  He had won on debut in March and went out an odds-on favourite in his swansong for the season.

“It’s an understatement to say I was nervous,” Stewart admitted.  “I was a wreck after looking up and seeing he was $1.70.   The expectations were high and he vindicated the short price.”

Swear To God will go for a spell and Stewart said time will tell if he’s up to the big races at the summer carnival.  “He’s had enough this prep and two months in the paddock will do him the world of good.  I think he’s got a future and so does Laqdar (Ramoly).”

Stewart and his wife Antonella bred the colt and they have already received several offers from Sydney and Melbourne stables.  But they have rejected seven-figure sums knowing their colt will winter as one of the favourites for the $500,000 G2 WA Guineas (1600m) at Ascot on November 19.

Parnham trained Playing God to win the 2010 WA Guineas and his stables are just a short walk from Stewart’s on Mathieson Road.  Nicknamed Rusty since his days as an apprentice, Stewart is a popular figure in the heart of Ascot’s racing precinct.

“I walk Swear To God past ‘Nifty’ most mornings,” Stewart told reporters with a wry grin after that initial win at Ascot.  “He swears the colt is the spitting image of Playing God.”

Playing God (Blackfriars) was WA’s most popular and expensive stallion last year covering 128 mares at $16,500 (inc GST).  He’s gone to another level since then and that may see an increase when Darling View’s Brent Atwell releases his service fee for 2022. 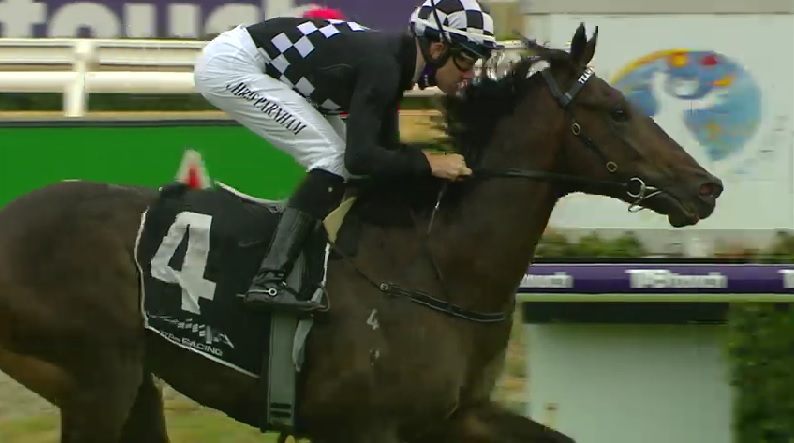