Vinery graduate Exhilarates picked the perfect stage to showcase her black-type ability in the MSS Security Sprint LR at Flemington on Tuesday.

The Godolphin mare relished a head-bobbing duel to defeat The Astrologist by a nose when racing down the famed straight-six course for the first time on Melbourne Cup day.  I was her fourth stakes win for trainer James Cummings coming on top of last year’s strikes in the Magic Millions 2YO Classic RL, Quezette Stakes Gr.3 and Atlantic Jewel Stakes LR.

The latest result improved her record to 5 wins and 7 placings from 18 starts with earnings of $2,098,450.  It also rubber-stamped her residual value being a daughter of More Than Ready’s Group 1 winning sprinter Samaready (Blue Diamond Stakes & Moir Stakes).

“James had her primed and she’s so competitive,” jockey Kerrin McEvoy said.  “She had no cover and overdid it first-up at Caulfield.  But she had the drop of them today and finished it off really well.”

Exhilarates completed a double for Vinery at Flemington following Outrageous in the Grinders Coffee Roasters Hcp (1400m).  He received a peach of a ride by Willie Pike who said they were always going to win once he settled behind the leader

“He was travelling but I was conscious of not being trapped on the fence.  I counted to 10 and then counted again before sliding out around the corner.  I thought I may have gone too early but he kept going to the line.”

Outrageous (All Too Hard) sold out of Vinery’s draft for $460,000 at the 2017 Gold Coast Magic Millions.  The Team Hawkes galloper was Group 1 placed in the 2018 ATC Sires’ Produce Stakes at Randwick but has taken a bit longer to pay back his price-tag compared to Exhilarates.

He had also won over Tuesday’s track and trip in the 2019 Autumn Trophy for a Rupert Legh-managed syndicate that has now banked $470,980.

Baramul Stud’s Gerry Harvey bred Outrageous by using Vinery champion All Too Hard over Fit And Ready (More Than Ready) who is a Sydney-winning half-sister to Catbird (Golden Slipper Stakes Gr.1). 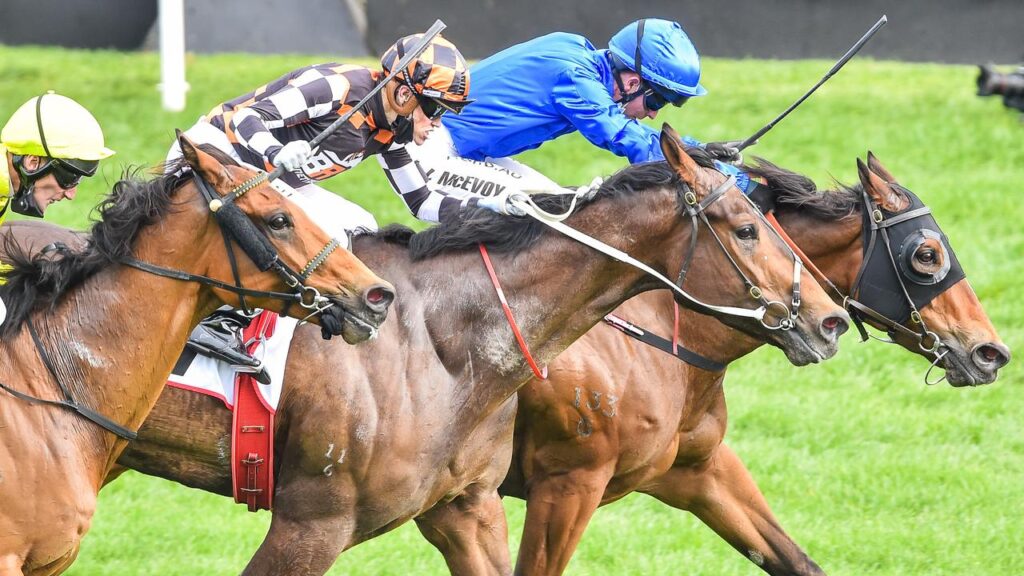