Street Boss is firing on several fronts and the Darley Victoria shuttler opened up another stakes-winning avenue in Ireland on Monday.

His 19th stakes winner, and first in Europe, arrived at Fairyhouse when Bebhinn forged to a first-up victory in the LR Blenheim Stakes (1200m).  She was never off the bridle and franked the form of a four-length maiden win at Navan in April.

Bebhinn (2f Street Boss – Passion Overflow by Hennessy) is prepared by Kevin Prendergast who had been planning a first-up tilt since July.  “She’s very exciting and that was some training performance,” jockey Chris Hayes said.  “I was told to keep it simple and she travelled with ease.  When I gave her a squeeze, she blew up a furlong-and-a-half out but her class got her home.”

Connections will target the G3 Cornwallis Stakes at Newmarket next month or send her straight out for a spell.  “We’re in no hurry,” owner Jeremy Harley said.  “She’s done everything Kevin said she would and may not run again this year.

“Kevin thought she was a very special filly in the spring.  It hasn’t been plain sailing and she’s grown and grown and will be a nice three-year-old sprinter next year.”

Bebhinn was a 42,000 euros buy out of the 2014 Goffs October yearling sale and is the first foal of a half-sister to the Royal Academy stakes winners Fokine, My Redbyrd & Polar Circle and Ocean Ridge (Storm Bird).

There’s more black-type in the pipeline for Street Boss in Australia and USA this Friday.

Street Boss (Street Cry) has his Melbourne star Petits Filous nominated for the G1 Moir Stakes at Moonee Valley.  She is coming off victories in the G3 Quezette Stakes and LR Cap d’Antibes Stakes and is a $2.30 fixed-odds favourite against a crack field of sprinters with the TAB.

Hours later, his American flag-bearer Holy Boss runs in the G3 Phoenix Stakes at Keeneland as a final lead-up for the Breeders’ Cup Sprint.  He completed a black-type hat-trick in the G2 Amsterdam Stakes at Saratoga last month. 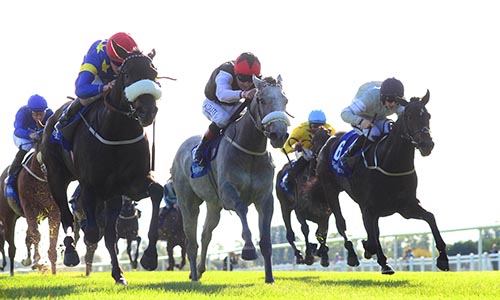