Headwater colt Predetermined loves a challenge and he wasn’t going to lay down in the Ladbrokes Switch Hcp (1200m) at Sandown on Wednesday.

After rolling to the lead on the Lakeside course, the Team Corstens colt knuckled down and maintained a margin in the straight to defeat Godolphin youngster Amegdul (Medaglia D’oro) and Sydney raider Montana Flash (Star Turn).

Predetermined was far from disgraced on debut when sixth in the $500,000 Inglis Banner at Moonee Valley in October and he wasted no time breaking through this prep under Jamie Kah.

“He’s a horse that we always thought had ability,” stable spokesman Don Sutton said.  “He was coming to the end of his prep at Moonee Valley and has developed and furnished into a really nice colt.”

Predetermined holds a Group 1 nomination for the $1 million Inglis Sires’ Produce Stakes (1400m) at Randwick on April 3.  He was bred by Vinery and sold for $200,000 at last year’s Inglis Ready 2 Race Sale to a syndicate managed by Seymour Bloodstock’s Darren Thomas.

His dam Future Gains (Red Ransom) is an unraced half-sister to Perth Stakes performer Reign Of Terror (More Than Ready).  She has a yearling colt by Press Statement and was covered by Casino Prince in November.

Vinery sire Headwater also loves a challenge having gone head-to-head with Spill The Beans to share Australian freshman honours for winners last season.  Now he’s engaged in a close contest with Pride Of Dubai for the second-season winners and wins titles.

The Godolphin shuttler holds a 31-29 lead on the winners’ ladder but it’s all-square at 37 for wins.

Headwater filly Heavenly Waters can claim her first black-type in the Supremacy Stakes LR at Ascot this Sunday.  She won the Crystal Slipper in November and is coming off a close second in the Magic Millions WA 2YO Classic RL last month.

His Adelaide filly Mileva can improve her 60% winning strike-rate when racing first-up in the Canadian Club Hcp (1050m) at Morphettville on Monday.  And his Eagle Farm Stakes performer Be Water My Friend can also support a Headwater surge this campaign following an impressive Grafton trial on Tuesday.

Team Hawkes trained Headwater and they paid $160,000 for his colt out of Squaw Peak at the Inglis Melbourne Premier Yearling Sale on Monday.  He was sold by Blue Gum Farm (as agent) for Rupert Legh and a syndicate that includes Gerry Ryan, Francis Cook, Neil Werrett, Max Whitby and Peter Wright. 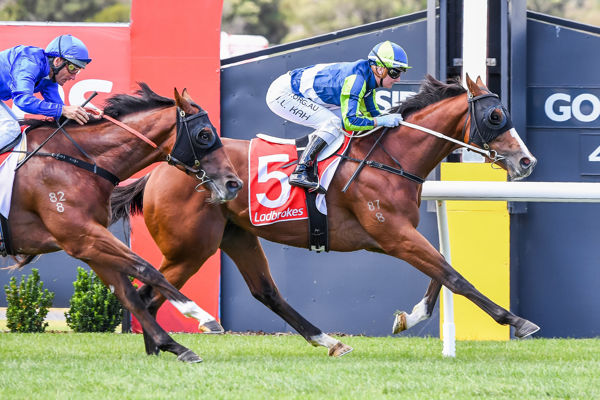