All Too Terrific was too good for her rivals at Pakenham on Tuesday even though she’s still a prep away from peaking for trainers Leon and Troy Corstens.

Facing the starter for just the second time, the 2yo daughter of All Too Hard caught the stable by surprise with a last-to-first victory in the XXXX Gold Maiden Plate (1200m).  She railed up behind the leader and then speared through a gap to sprint past odds-on favourite Our Crown Jewels (NZ).

“She ran really well to finish midfield first-up at Echuca,” Troy Corstens told vinery.com.au last Friday.  “She’s a nice stayer in the making for next season.”

Assistant-trainer Dom Sutton admitted they expected All Too Terrific to need more time and more ground than 1200m.  “She’s shown us ability at home but we thought she would start putting it together in the spring.

“That was a convincing win.  It’s still her first prep and the All Too Hards get better as they get older.”

All Too Hard has also upgraded her immediate pedigree.  She’s the first foal of Wagga maiden winner Terrific Tulla (Shamardal) from a European family going back to 2001 Prix Saint-Alary Gr.1 winner Nadia (Nashwan).

All Too Terrific was a $50,000 buy from Noorilim Park at the 2018 Inglis Melbourne Premier Sale.  Her owners include Scott Agresta, (son of racing legend Joe Agresta) and his New Style Racing Syndicate.

“I’m impressed,” winning jockey Jamie Mott said.  “She relaxed and then really found the line.  The plan was to get to the outside but she worked through the field and ended up doing it easily.”

All Too Hard stands for a $27,500 (inc GST) service fee at Vinery and he has another promising newcomer named All To Do at Doomben on Wednesday. 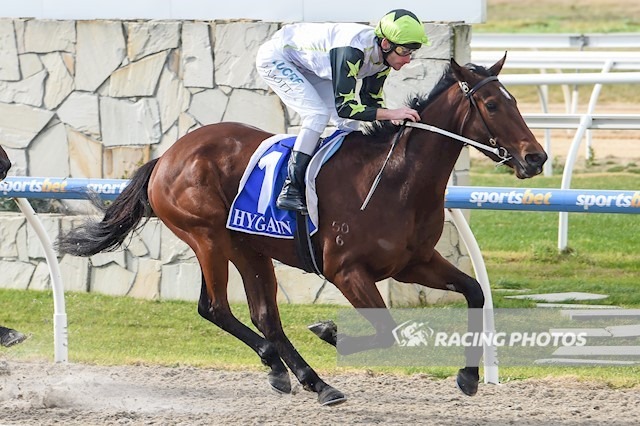