Exhilarates was labelled a ‘true professional’ by Craig Williams after an authoritative victory in the Atlantic Jewel Stakes LR at Moonee Valley.

Williams was aboard for his first race ride on the Vinery graduate and they adapted to the prevailing conditions on Saturday.  “That win was even better than it looked on face value,” he said.  “She’s better coming from off the pace but I was forced to control the race on the speed because that’s the way the track is playing.

“I was on the best horse and trusted she was that good.  She’s a true professional and they can keep her to shorter distances or stretch out further.”

Exhilarates (Snitzel) opened her spring campaign with a win in the Quezette Stakes Gr.3 at Caulfield last month and she had at least a length in hand over Sassy Salitage (Toronado) when racing second-up over 1200m.

Godolphin spokesman Sean Keogh said the stable would let the dust settle before a decision is made on her immediate future.  “She’s electric over 1200m and the blinkers had her focused today.  But she’s a casual customer and versatile so there’s the option of going longer.”

The alternatives for her next outing include the Moir Stakes Gr.1 over 1000m at Moonee Valley on September 27 or the Thousand Guineas Prelude Gr.2 over 1400m at Caulfield on September 29.

A $600,000 Magic Millions yearling purchase from Vinery Stud in 2018, Exhilarates more than doubled that price-tag when returning to the Gold Coast a year later to win the Magic Millions 2YO Classic RL.

She was one of 20 yearlings purchased by Sheikh Mohammed to increase the diversity of Godolphin’s domestic gene pool and the infusion of a Group 1 family from Vinery has been a godsend.  Her dam Samaready (More Than Ready) was a Group 1 winner of the 2012 Blue Diamond and 2013 Moir Stakes and her latest foal is a 2yo colt by All Too Hard. 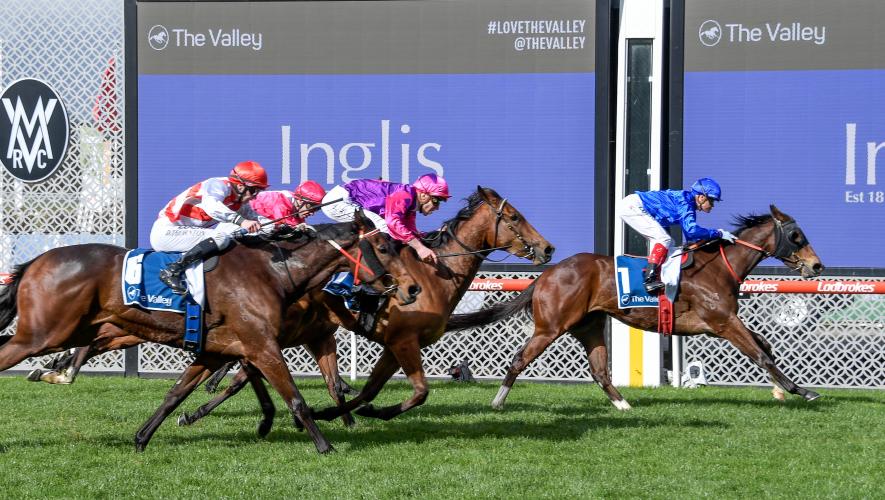