Patrick Payne picked up a bargain when he paid $4,500 for Widgee Turf as a foal at the 2014 Inglis Great Southern Sale.

The Turffontein youngster was bred and sold by Little Plains Stud owner Barb Ivill and looked a nice type winning the Planet Ruler Hcp (1400m) at Flemington on Saturday.  He was ridden a perfect race by Billy Egan who stayed on the inside section of the track to score by less than a length.

Widgee Turf had won on debut at Swan Hill in August and put the writing on the wall in town with another good effort second-up at Moonee Valley last month.  He is the final foal of Greyhound (Kala Dancer) who has also foaled minor winner by Estambul and Legion.

Ivill (pictured) pensioned Greyhound last year but she is still going strong at Little Plains which is situated on 100 acres in Victoria’s north-east at Laceby.  “I love working in the outdoors with horses and all sorts of animals for that matter,” she said in an interview with racing.com.  “I’ve had spinal problems from a riding accident when I was 21 and I guess these things come back to haunt you when you get older.” 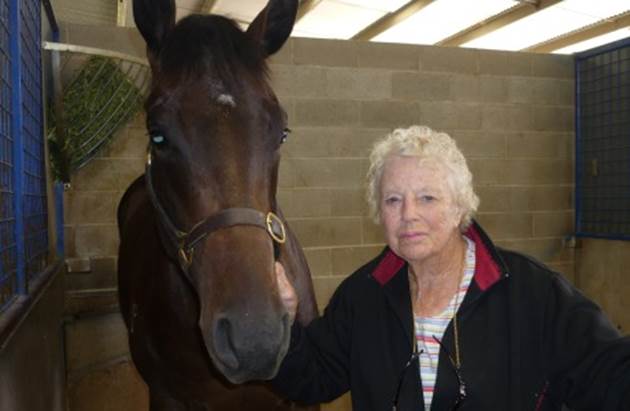 Widgee Turf’s family has been a winning one for Little Plains.  Ivill also bred Greyhound’s half-brothers Field Hunter (Torrential) and Change the Grange (Umatilla) to a total of 25 wins and both were successful at Flemington.

Setting up Little Plains in 1968 with her late husband Ted, Barb has been operating the stud for the last 20 years.

“You have to be a jack-of-all trades running a commercial property and I’m lucky to have had good staff over the years.”

Little Plains will be back with another draft of yearling for the Inglis VOBIS Gold Sale in April.  “I remember the first-ever sale at Oaklands when it was owned by Dalgety,” Ivill recalled.  “It was hot with a howling wind and there weren’t any trees!

“I think the Victorian breeding and racing industry is in a really healthy position with Super VOBIS and VOBIS Gold.  Those types of bonus schemes only make it more attractive to race horses in Victoria.”