Ridden by Joel Rosario, she motored home from midfield to collar stablemate Get Stormy in deep stretch clocking 1:32.45s on turf over 1600m.  Get Stormy had inflicted her only defeat this year in the Fourstardave Hcp Gr.1 at Saratoga in August but the More Than Ready mare turned the tables with an eye-catching rally into the straight at Santa Anita.

“We had a perfect trip.  The speed got away from me a little in the backstretch but she was comfortable and in a good spot so I just sat still,” Rosario said.  “When I asked, she gave me a strong run and that’s when I knew we would win.  Got Stormy fought back a little.  She beat us this summer but my filly still had more left and we pulled clear.”

The 2019 BC Mile is More Than Ready’s 7th win at the Breeders’ Cup Championships and that sends him one clear of previous record-holders Sadler’s Wells and Unbridled’s Song.

Uni (5m More Than Ready – Unaided by Dansili) had earned a free berth into the BC Filly & Mare Turf (2000m) off a spectacular victory in the First Lady Stakes Gr.1 at Keeneland last month but trainer Chad Brown elected to stay put at her pet trip of 1600m.

“It wasn’t a tough decision to pay a $100,000 late-entry fee for the Mile,” Brown noted.  “We knew it was going to be tougher against the boys than the First Lady but this is her distance.  She’s remarkable horse and is really on top of her game right now.

“She’s got the best turn of foot I’ve ever trained.  The last quarter, I don’t think I’ve had a horse like her.”

Brown said Rosario is a perfect fit for the daughter of Vinery legend More Than Ready.  “Joel is a world-class jockey and did exactly what we planned.  The relationship between him and this horse is about as strong as you can get.”

Uni (pictured) is raced by Michael Dubb, Sol Kumin, Robert LaPenta and Bethlehem Stables.  She was a stakes winner in France prior to arriving in North America and her record now stands at 10 wins in 18 starts for $2.34 million in prizemoney.

More Than Ready was also in the frame at Santa Anita on Friday as the damsire of BC Juvenile Turf Sprint winner Four Wheel Drive (American Pharoah) and BC Juvenile Turf winner Structor (Palace Malice). 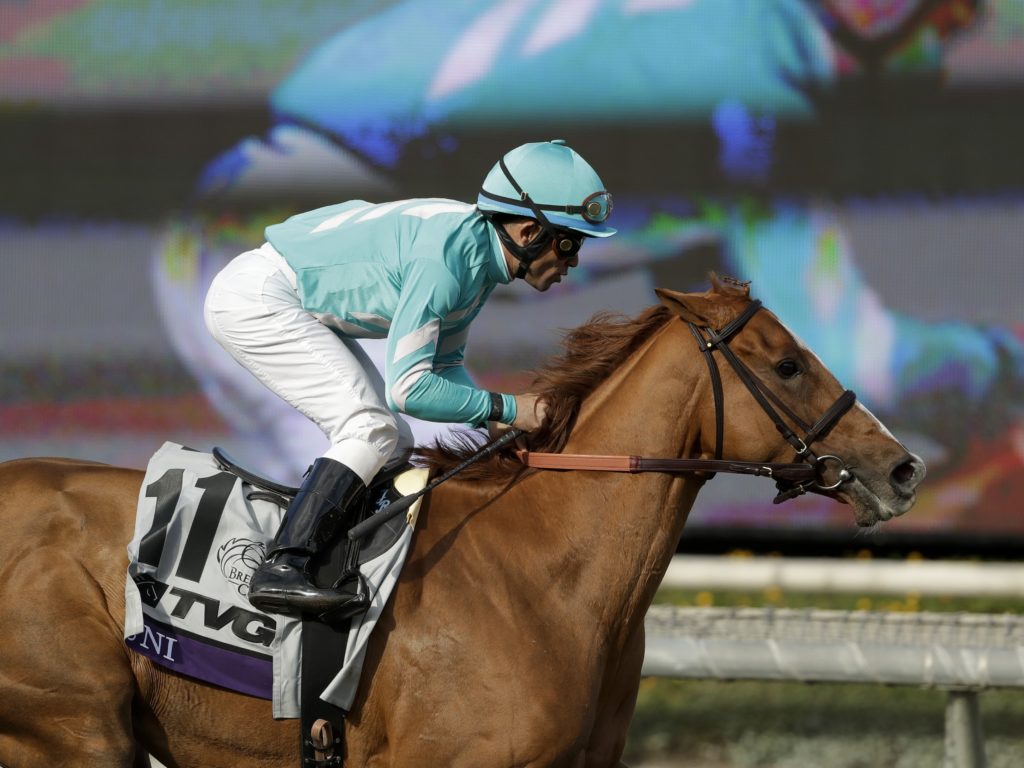