Blackfriars can top $5 million in earnings for the fourth season in a row after siring another city double on Saturday.

The Scenic Lodge champion has earnings of $4.82 million with two Saturday and three midweek meetings remaining before July 31.  He kept the till ticking over at Belmont with Come Play With Me ($92,000) and Friaresque ($41,300).

Come Play With Me won the Swan River Vase (2200m) with a performance that excited trainer Adam Durrant.  “He’s been in work a long time but has won four in a row.  I’m leaning towards a quick break and then sending him over to Chris Waller in Sydney.

“They are mapping out a couple of programs that aren’t too ambitious.  Plenty of Perth horses have gone east recently and run really well.”

Durrant’s parents Geoff & Vicki bred Come Play With Me from their Ascot stakes winner Russian Playmate (Dr Johnson).  They will be hoping there’s more like him in the pipeline – his 3yo brother Black Russian won a Belmont maiden last Wednesday, his unraced 2yo brother is named Blackwater Bay and there’s a yearling colt from the penultimate crop by Blackfriars.

Friaresque stormed down the centre of the track to bring up a Blackfriars double at Belmont.  Unlike the first-leg winner, he had been battling a run of outs since July 2017 and paid $41 with the TAB.

“He’s been knocking on the door for a while,” stable rep Lucy Mellon said.  “He’s been happy down at the beach and is looking lovely with a beautiful coat.”

Friaresque was bred by Scenic Lodge and is the first foal of Pearlesque (Statoblest).  She is a sister to stakes winning sprinter Impressive Stats and broke her maiden at Ascot on the same day Americain won the Melbourne Cup.

Pearlesque’s second foal Friar Fox won last year’s LR Natasha Stakes and she also has a filly among the last crop by Blackfriars.

Blackfriars (Danehill) will equal a WA record this season with 9 titles in a row since 2011.  Former Scenic Lodge champion Scenic (Sadler’s Wells) also won 9 consecutive premierships from 2002 to 2010. 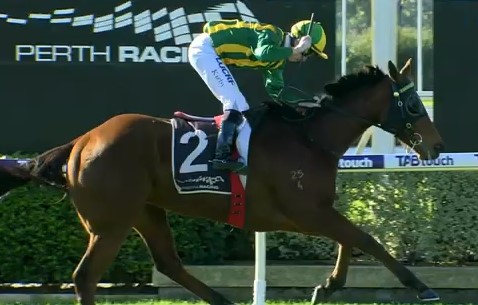 COME PLAY WITH ME