Vinery enjoyed another very successful session at the Gold Coast Magic Millions on Wednesday with a pair of $600,000 colts by Capitalist and Snitzel.

Leading agent John Foote signalled the winning bid for the Capitalist – Eiffel Tower chestnut colt who was offered by Vinery as agent for John Stuart Investments breeder Brian Backshall.  Catalogued as Lot 250, he’s the first foal of a Stratum mare who descends from blue-hen Shantha’s Choice.

“He’s a beautiful mover and overall a very nice colt,” Foote said.  “He will eventually go to Hong Kong.  I gave one of my clients up there a short-list on type.  He loved this colt’s pedigree and I guess he had to pay for the privilege.”

A Snitzel colt became the second Aquis Farm buy from Vinery when making $600,000 on Day 2.  Catalogued as Lot 314, he’s by Australia’s reigning champion sire from phenomenal producer Fit And Ready.  Aquis Farm owner Tony Fung had purchased a Written Tycoon colt from Vinery for $525,000 on Tuesday.  Both were bought in partnership with Phoenix Thoroughbreds.

Team Hawkes has Outrageous (All Too Hard) primed for another big performance in the $1 million Magic Millions Cup (1400m) at the Gold Coast this Saturday.

Fit And Ready’s current 2yo colt Taborca is also by Snitzel and he’s with Chris Waller after going through Vinery’s draft for $500,000 at last year’s Magic Millions.  The Snitzel – More Than Ready cross has already produced Vinery graduate Exhilarates who won the Magic Millions Classic RL, Quezette Stakes Gr.3 and Atlantic Jewel Stakes LR in 2019.

Vinery’s Day 3 draft at the Magic Millions includes another colt on behalf of Brian Backshall and his wife Noela.  Catalogued as Lot 568, he’s a first-crop son of Russian Revolution from Moretti (More Than Ready).  They bred and sold Russian Revolution who went on to join Vinery’s Group 1 winning graduates in the 2017 Galaxy and 2018 Oakleigh Plate. 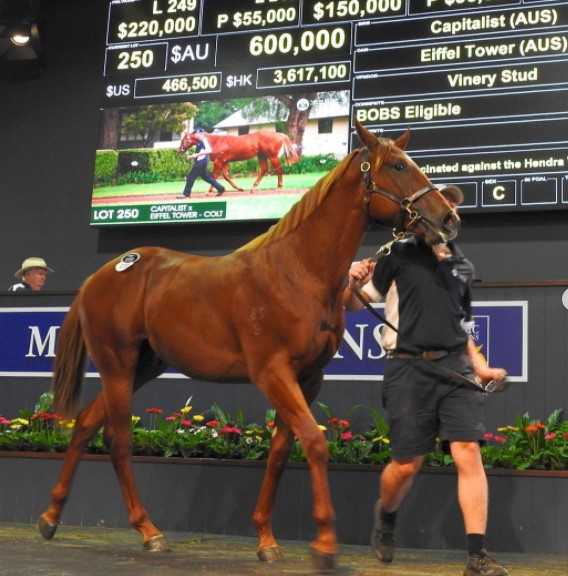