Chris Waller reopened his account with Press Statement when Giovanna Run improved off an unlucky first-up loss to win at Randwick on Saturday.

Tommy Berry took luck out of the equation by setting the pace in the Everest Carnival on Sale 2YO Hcp (1400m) and it paid off for Waller with a three-quarter length victory over Bazooka (Smart Missile).

Giovanna Run is the fifth first-crop winner by Press Statement who retired to Vinery Stud after a Group 1 winning career with Waller and owner-breeders Tony & Gianna Muollo..  “She’s a talent,” he enthused.  “We gave her an early prep but she wasn’t quite ready.  She’s making nice progress now and I can’t wait to see her as a three year-old.

“We had a bit to do with Press Statement and think very highly of him and this filly.  We didn’t have a set plan from a tricky gate but it was a good ride by Tommy.”

Tony Muollo bred Press Statement and was joined in a syndicate that included Vinery for Group 1 strikes in the 2015 J J Atkins Stakes and Caulfield Guineas.  “I’ve had a bit of luck and a lot of that is down to Chris,” the former NZ-based businessman recalled after the J J Atkins.  “I’m one of his original owners from the early days at Foxton and have seen him go pretty much from nothing to everything.”

Berry acknowledged his pre-race strategy wasn’t set in stone second-up over 1400m on Saturday.  “There wasn’t much speed so I decided to ride her like she was the best horse in the race.  She was in a nice rhythm in front and we got an easy mid-race sectional which made all the difference.”

Giovanna Run started an easing favourite after going down narrowly to Obvious Step at Randwick on July 1.  She shifted off the fence with James MacDonald that day only to be bloused out by the winner who took full advantage of a rails run at the furlong.

“I had to ride her on one rein like James (MacDonald) did and she will keep improving off today,” Berry continued.  “She was feeling the pressure late but lifted again when she heard the others coming.

“The best is yet to come from this one.” 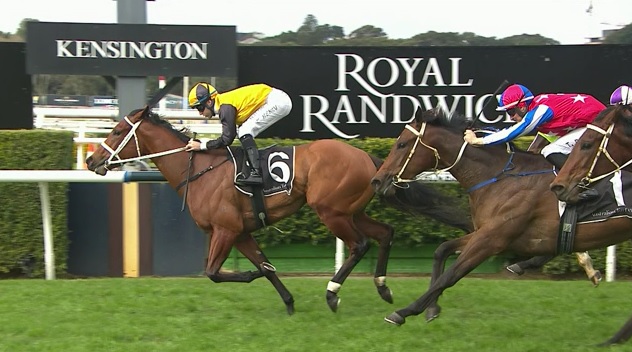