The winners keep coming from the first crop of Swettenham Stud’s in-form sire Equiano – his chestnut filly Ventura Shadow ran a cracker to land the Haylin Stakes (1000m) at York on Friday.

Ventura Shadow (2f Equiano – Stavinsky’s Gal by Stravinsky) was coming off a decent second in a nursery at Musselburgh to turn over short priced favourite Pres Rapide on the first day of York’s prestigious John Smith’s meeting.

Jockey Paddy Mathers was happy to sit off the pace and then ensured a clear run on the Knavesmire course by switching wide at half-way point.  The Equiano filly ran on gamely to the line to score by a neck.

“It’s always difficult to know where you are with horses so early in their career,” trainer Richard Fahey said.  “But she’s a genuine filly and I thought she would run well.”

Ventura Shadow is the second winner by Equiano from Fahey’s Musley Bank stables.  He sent out Moving Melody to score on debut at Newcastle in April.

Fahey purchased his York winner for 30,000 euros (AUD 42,810) at the 2013 Tattersalls (Ireland) Yearling Sale.  Her dam Stavinsky’s Gal won 5 races in the USA and was stakes placed in Kentucky and Florida.

Ventura Shadow had been pin-hooked as a foal by Victorian bloodstock agent Gary Mudgway for 8,000 guineas (AUD 12,935) at the 2012 Tattersalls December Sale.

Equiano (Fr) will have his first southern two year-olds gearing up for their first campaigns in the spring.  Swettenham Stud has kept his fee unchanged at $15,000 (plus gst) this year. 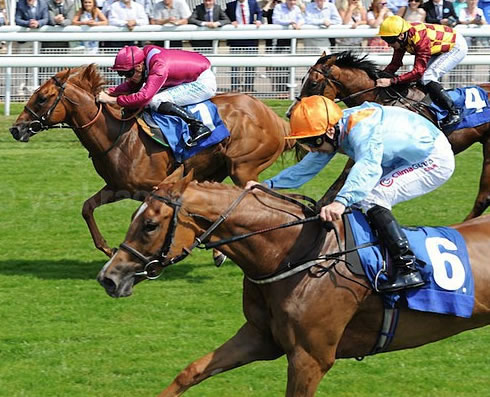