Matt Laurie won a South Australian Derby with Escado (Casino Prince) and he’s gunning for another Group 1 with his younger half-brother Aberro.

The Mornington-based trainer has taken his All Too Hard colt along quietly with this season’s classics in mind and that patience began paying off in a big way at Sandown on Wednesday.

Backed into an odds-on favourite for the start of his second prep, Aberro powered home to claim the leaders at the furlong and then refused to surrender when tackled by late-closer Wassergeist (Fastnet Rock).

“He was there to be beaten first-up but class got him home,” Laurie claimed after the Chef’s Hat Maiden Plate (1300m). “He has a big action and needs room so I told Ben (Melham) to be conservative from the outside gate.

“It was happy to see him run over the top of them and then dig deep. That’s the sign of a good horse.”

Aberro (3c All Too Hard – Secret Cause by Giant’s Causeway) finished second in the $100,000 VOBIS Gold Sires (1500m) at Mornington in March and then embarked on a hit-and-run mission to Randwick where he finished midfield in the Champagne Stakes-Gr.1 (1600m).

“He’s not the greatest trackworker and I didn’t think he would race as a 2yo,” Laurie explained. “But he surprised me – all three runs were excellent and I knew he would keep improving.”

Laurie indicated Aberro would start over 1500m at Moonee Valley on September 9 before stepping up to 1800m at Caulfield at fortnight later. They will lead-in to the Caulfield Classic-Gr.2 (2000m) on October 21 and the Victorian Derby-Gr.1 (2500m) at Flemington on November 4.

“He’s a sensible horse with a staying action and I’m glad he’s in my stable,” Laurie said. “Escado won beyond 2000m and I think Aberro can do the same.”

Aberro is a homebred for Balnarring breeder John Ferguson of Kineld Thoroughbreds. He’s the 14th individual winner from the first-crop of Vinery sire All Too Hard and, like the majority of his stock, is all the better for a measured juvenile campaign. 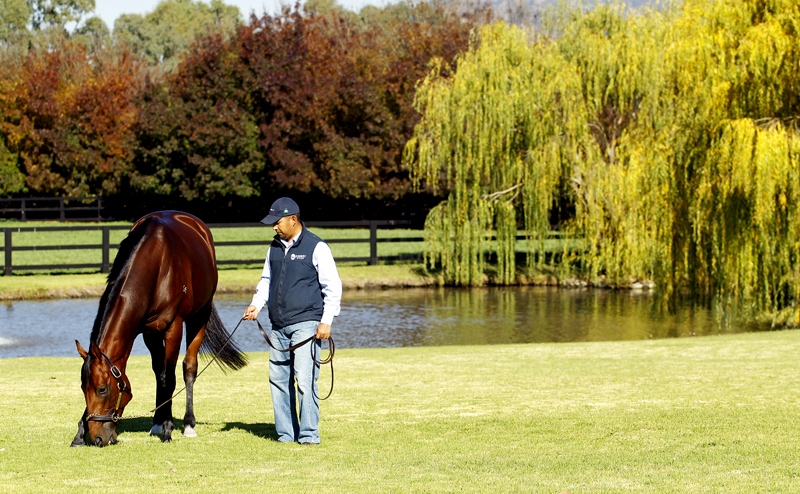