Group 2 events at Rosehill and Flemington will be the focus for Vinery Stud this Saturday but a run-of-the-mill sprint at Doomben could create more headlines as the spring carnivals step up a gear this weekend.

All Too Hard Group 1 winner Alligator Blood returns to action for the XXXX Dry Hcp (1110m) in what’s shaping up as a high-profile campaign for colourful owner Allan Endresz.  He has increased the hype by hiring a private security detail to shadow Alligator Blood while trainer David Vandyke would prefer to keep it low-key and let the horse do the talking.

“This is a bit different to most Saturdays for me and I’m a little nervous,” Vandyke admitted this week.  “He’s strengthened up and is in a good head-space but I would have preferred him over 1200m.

“I’m just looking for a good performance first-up.  The Golden Eagle is the grand-final.  Whether we go to The Everest first or the Silver Eagle is up for further discussion.  We haven’t got a slot yet for The Everest, but I wouldn’t deny his owner the chance to run in the world’s richest race on turf even though I’m not in love about heading that way.”

TAB fixed-odds has installed Alligator Blood a $1.70 favourite despite the steadier of 61kg and six months on the sidelines.  He has a perfect first-up record and, if the rain continues, he can call on the same soft-track ability evident during that stirring duel with Kiwi colt Catalyst at Flemington.

Vandyke also has All Too Hard mare One for Betty entered for the Brisbane Hcp LR earlier in the day at Doomben.  She is a homebred for Patrick Hodgens and has earned a black-type debut following recent wins at Sunshine Coast and Eagle Farm.

Vinery graduate Farnan returns to Rosehill and the scene of his Golden Slipper Stakes Gr.1 triumph in the Run to the Rose Gr.2 this Saturday.  He’s a $2.40 TAB fixed-odds favourite, however, it won’t be plain sailing with King’s Legacy and Rothfire also coming off Group 1 victories last season.

Hall Of Famer Gai Waterhouse won’t hear of him being beaten.   “It’s a privilege to be training an outstanding athlete like Farnan and he was the superior 2yo colt in Australia.  He’s matured and Hugh (Bowman) is very excited.  When he does go into battle, he puts them away and he puts them away convincingly.”

Farnan (Not A Single Doubt) was a $550,000 graduate from Vinery’s consignment to the 2019 Magic Millions Yearling Sale and his value sky-rocketed as a stallion prospect with a dominant front-running victory in the Golden Slipper.

Vinery-sired black-type winners Global Quest (More Than Ready) and Sweet Deal (Casino Prince) can bookend Farnan at Rosehill.  Global Quest is back in harness for the Dulcify Hcp LR and Sweet Deal can double up in the Sheraco Stakes Gr.2 following her Toy Show Stakes Gr.3 victory at Randwick last month.

At Flemington, Vinery has Wisdom of Water (Headwater) and Hard Landing (All Too Hard) engaged in the Danehill Stakes Gr.2.

Caulfield-based conditioners Mick Price and Michael Kent have taken over the training of Wisdom of Water and describe him as a magnificent-looking colt.  “If you get a feel that your horse is good, you have to be optimistic with them,” Price said of his new recruit.  “You need to have a sense of timing with them, too.

“They have to be peaking on the day and his grand-final is the (Gr.1) Coolmore Stud Stakes.  He’s a bit of a lad but has been behaving himself since coming down from Queensland.”

Among the fairer sex, More Than Ready filly Jenni’s Rainbow and Vinery graduate Letzbeglam (Snitzel) are heading for the classics via the Cap d’Antibes Stakes LR.

David Brideoake is confident Jenni’s Rainbow will reproduce her brilliant debut down the straight and Letzbeglam appears each-way value at $8 if she can duplicate that breath-taking victory in the Blue Diamond Prelude LR back in February. 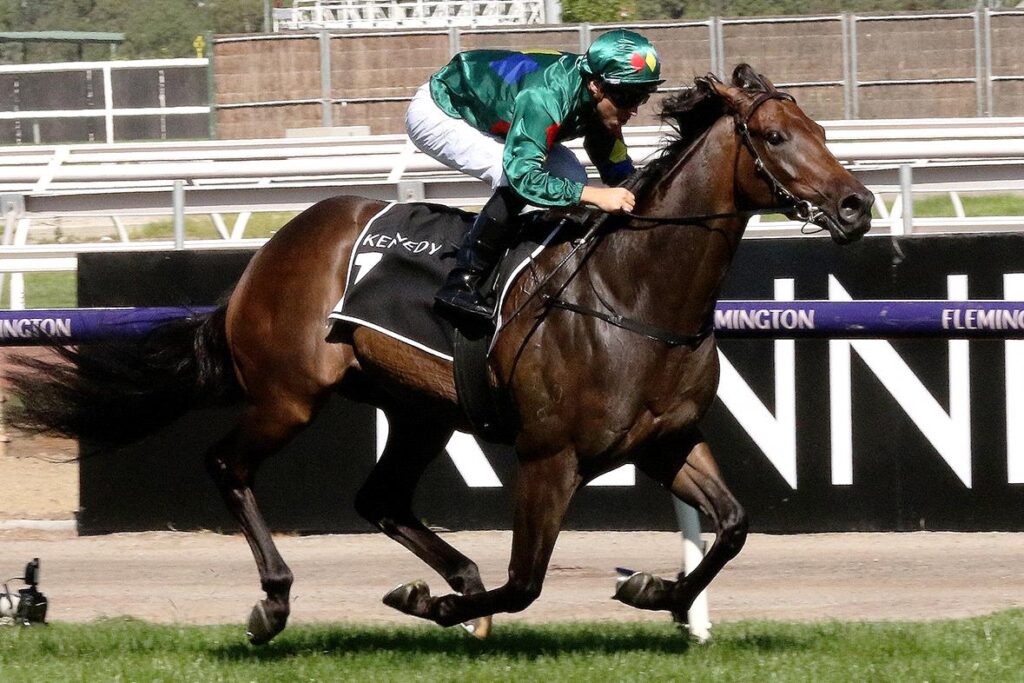