The All Too Hard newcomer raced on the speed to defeat stablemate Baaqyah (I Am Invincible) by a half-head in a thrilling renewal of the straight-course contest on Thursday.

Hard Landing (2c All Too Hard – Snitzerland by Snitzel) will be given the chance to emulate Lindsay Park colt Nadeem and Bel Esprit who have completed the Maribyrnong Plate – Blue Diamond Stakes Gr.1 double since the turn of the century.

“I honestly think he will be a Blue Diamond or Golden Slipper contender,” Hayes said.  “I thought he might have been a bit vulnerable in the lead because he’s been working better at home when taking a sit.

“Baaqyah had a good crack but he was too strong.”

All Too Hard got him from Snitzerland whose signature victory was a Group 1 down the Flemington straight in the 2014 Lightning Stakes.  The Vinery sire has been represented by four stakes winners this season and 12 overall while maintaining a lofty 63% winners-to-runners strike-rate.

Hard Landing is a homebred for Vinery partner Steve McCann and Neil Werrett and they race him in a syndicate that includes Darren Thomas and Laurie Macri.  They are also in Vinery colt Exceedance who won the Coolmore Stud Stakes Gr.1 at Flemington on Saturday.

Vinery’s Bloodstock Manager Adam White recalled Hard Landing selling for $280,000 at the Magic Millions in January.  “He has a great physique,” White said.  “Snitzerland tends to throw big, strong foals and he certainly looked the part at the Gold Coast.”

Lindsay Park was able to buy the colt a bit cheaper than expected because of a plain head.  “We really liked him and now he’s growing into that head,” Hayes laughed.  “But he had the right pedigree and now we will we give him a break and come back for the Blue Diamond.”

Hoofnote:  Vinery added more black-type later on Thursday when Cellarman won the Ladies Day Cup LR at Hawkesbury.  The 6yo son of retired sire Mossman made $70,000 through the Vinery draft at the 2014 Magic Millions National Weanling Sale. 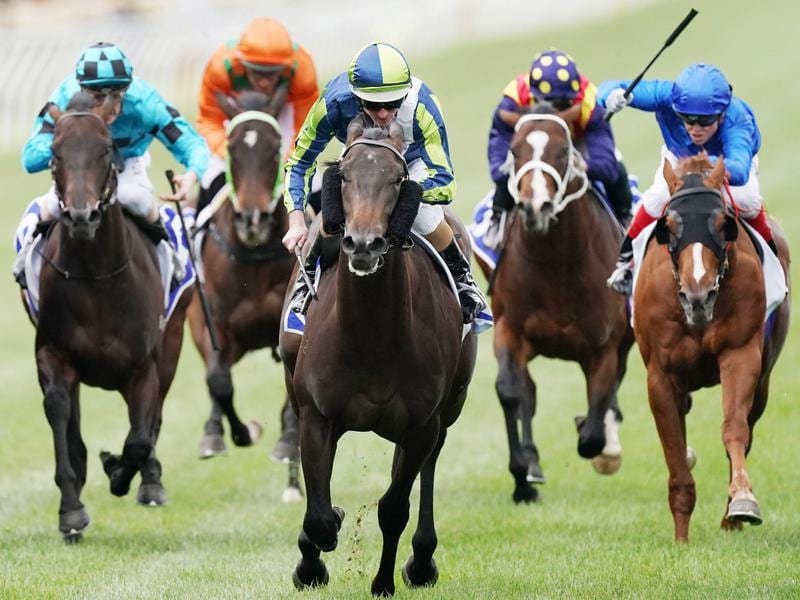