Vinery champion All Too Hard is poised to break the Australian third-crop wins record held by Smart Missile this weekend.

Smart Missile sired the winners of 180 races in 2017-18 and that’s under immediate threat with 20 days of this season remaining.

The John Thompson-trained Dunbrody Power sent All Too Hard’s tally to 179 wins in the Minnamurra River Maiden Hcp (1000m) at Kembla Grange on Thursday.  Starting an odds-on favourite first-up, she broke through under a class ride from Blake Shinn for owner Walter Power.

All Too Hard can top and tail the Caulfield card on Saturday with last-start Sandown winner Can’t Be Done (R1) and classic colt Villermont (R9).  “Can’t Be Done is a lovely horse and has just got the best attitude for a two-year-old,” jockey Jamie Mott said.  “Ever since Day 1 he’s just been push button.”

Vinery homebred Villermont is running into form with three runs under his belt following twelve months on the sidelines.  He won the 2017 Sandown Guineas Gr.2 and will appreciate the step up in distance for the Ladbrokes Multiverse Hcp (1700m).

Pluck (USA) is also on a roll and his promising sprinter Star Boy was nailed a nose in the Ramornie Hcp LR at Grafton on Wednesday.  Pluck can play a winning hand at Doomben on Saturday with Mongolian Wolf (R2) and Removal (R7).

Mongolian Wolf has won to Group 3 level at Randwick and will return to Doomben for the first time since a midfield finish in the 2017 Queensland Derby Gr.1.  Removal won at Doomben on Wednesday and trainer John Smerdon will monitor his recovery before deciding on a start in the Astrojump Hcp (1200m).

More Than Ready turns the clock back 20 years with Rushing Fall (Diana Stakes Gr.1) and Tomato Bill (Sanford Stakes Gr.3) at Saratoga this Saturday.  The Vinery legend won the Sanford in 1999 and his trainer Todd Pletcher won it again with More Than Ready colt Ready’s Image in 2007.

Rushing Fall’s only loss in 9 starts was a neck second in the 2018 Edgewood Stakes at Churchill Downs.  She has already racked up a pair of Group 1 wins this year in the Jenny Wiley Stakes at Keeneland and Just a Game Stakes at Belmont Park.

Brown can get his Saratoga campaign off to a winning start on Friday with Made You Look in the Forbidden Apple Stakes Gr.3.  He was originally prepared by Pletcher and claimed his first black-type victory at Saratoga in the 2016 With Anticipation Stakes Gr.2.

The 105th running of the Sanford on Saturday will see Tomato Bill looking to build on a three-length debut win at Delaware Park in May.  “It’s a very good race but he’s an exciting horse,” trainer Christophe Clement declared.  “He’s been stabled here since June and has been working well.”

Denali Stud sold Tomato Bill for $500,000 at the 2018 Fasig-Tipton Saratoga yearling sale.  His dam is a Group 3 placed daughter of Summerly (Kentucky Oaks Gr.1).  “I love More Than Ready and I love Saratoga.  Who doesn’t?” agent Kerri Radcliffe said after the half-million bid twelve months ago.  “He’s a strong, big-walking colt and looks fantastic.”

Three Chimneys Farm part-owns Tomato Bill and they also bred More Than Ready 2yo filly Magic Dance who won the Debutante Stakes LR at Churchill Downs last month.  Trainer Steve Asmussen subsequently sent her to Saratoga and there are any number of juvenile races he can target at the summer carnival through to September 2. 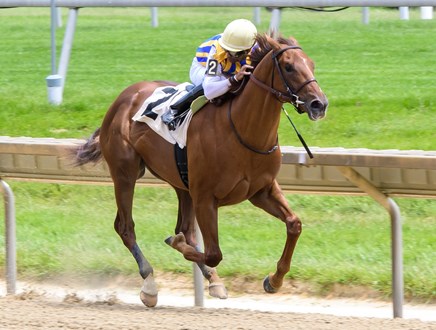