Former Perth flyer Agent Pippa gave her new owners an instant return with a front-running victory in the $125,000 ATC Foundation (1100m) at Rosehill on Saturday.

The Demerit filly was sold to Australian Bloodstock and Aquis Farm for $200,000 at the Magic Millions National Sale in May.  “That was very impressive,” trainer Kris Lees said.  “Hugh (Bowman) was positive on her.  That was her pattern in WA.  She’s already a stakes winner and will get more chances over here in the next 12 months.”

Agent Pippa (3f Demerit – Female Agent by Commands) won last year’s G3 Gimcrack Stakes at Ascot for trainers Ben & Dan Pearce.  She was bred at Taunton Vale Stud and is a sister to Double Digit who has won 9 races and $268,000 for trainer Ash Maley.

Their dam Female Agent has a yearling colt and filly foal by Demerit and was bred back to him last year.

Now based at Rangeview Stud, Demerit stands for a $6,050 service fee alongside Galah ($4,400) and So Secret ($2,750).  “She’s a naturally fast horse and I only see her improving,” Bowman said after bringing Agent Pippa back to scale.  “Kris was worried about the last 100m but she was strong to the line.”

Demerit (Lonhro) opened his account in the east earlier this season when Don’t Blush Baby won at Flemington during the Melbourne Cup carnival.  His winning strike-rate is bubbling along at 64% and his leading earner Special Reward ($476,655) will join Agent Pippa in black-type ranks next season. 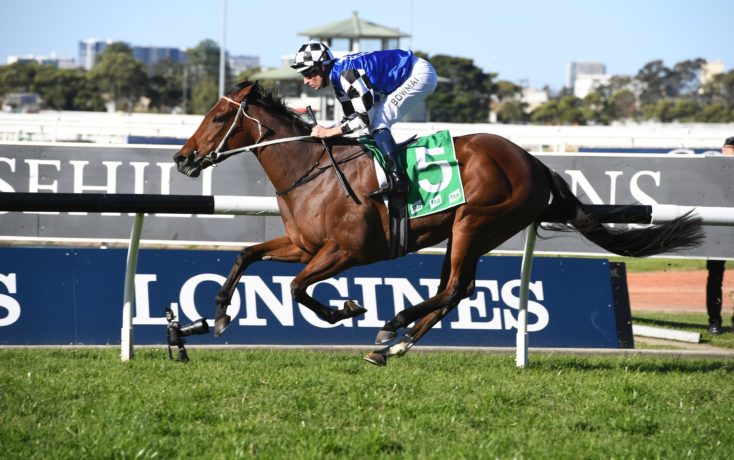