Vinery Stud sire All Too Hard is proving increasingly popular in South Africa for those who can afford the Rand’s punitive conversion rate to Aussie dollars.

Leading owner Roy Moodley paid $70,000 for All Too Hard filly Roy’s Riviera at the 2016 Gold Coast Magic Millions and that looks like money well spent after her victory in the East Coast Cup LR at Greyville on Saturday.

She had been Group 3 placed in the last two editions of the Flamboyant Stakes and has now earned over R520,000 after rattling home at the end of 2000m.  “Nothing worries her, like most of the Aussie-bred horses,” Summerveld conditioner Frank Robinson declared.  “She’s got the size, the pedigree and everything else to be a top filly.”

Roy’s Riviera is from Baramul Stud mare Donna Amata (Anabaa).  She didn’t trouble the judge in a half-dozen starts for Ron Quinton but has now foaled two stakes winners – Sebring Sally was first to salute in the 2016 Strutt Stakes LR.

All Too Hard has a perfect record of four winners from four to the races in South Africa.  Roy’s Riviera is his 8th stakes winner overall and second in Kwa-Zulu Natal following Frosted Gold who is being set for the Sun Gold Medallion Gr.1 at Scottsville on May 25.

All Too Hard 3yo Behemoth gave a glimpse of his Group 1 ability when runner-up in the Goodwood Hcp (1200m) in Adelaide on Saturday.  He charged home late to go down narrowly after being pocketed until the furlong at Morphettville.

“It was a huge run,” jockey Andrew Darmanin claimed.  “He should have won.”

All Too Hard has 8 foals and 16 yearlings catalogued for the Magic Millions National Sale that commences on Thursday.  His yearling filly from Baramul Stud mare Hickory Hills (Lot 2123) is a full-sister to Lincoln Hills who won for the third time at Awapuni on Saturday.

Lincoln Hills is one of 9 individual winners out of 11 starters for All Too Hard in New Zealand.  Vinery will stand him for a $27,500 (inc gst) service fee this year. 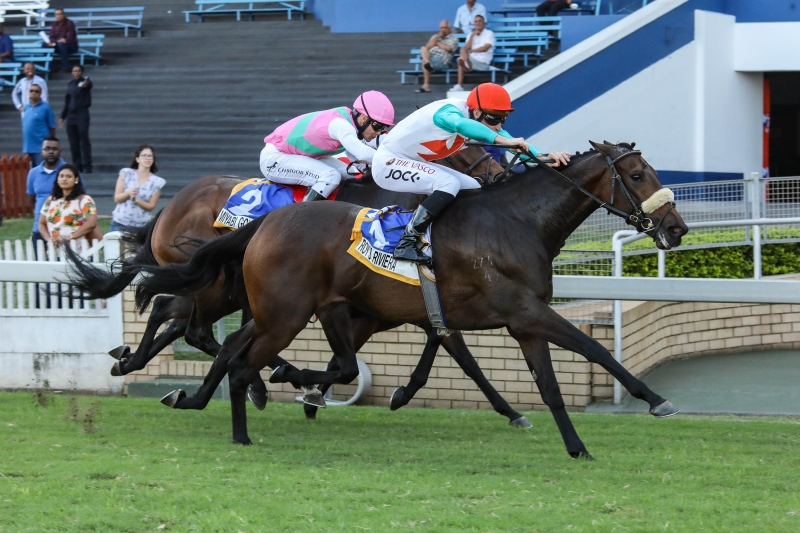