Untapped 2yo colt Artorius created another first for Vinery Stud with a blistering finish in the Blue Diamond Stakes (Gr.1, 1200m) at Caulfield on Saturday.

A Sandown winner second time out for trainers Anthony and Sam Freedman last month, he made significant improvement with the addition of blinkers to defeat Godolphin colts Ingratiating and Anamoe.

The Blue Diamond victory was timed to the minute for Vinery ahead of their 12 yearlings travelling to Melbourne for the Inglis Premier Sale starting next Sunday.

Victoria’s jewel in the crown also completed a clean-sweep of Australia’s premier juvenile events by Vinery graduates in the last three seasons.

Vinery claimed the first two legs in Queensland and NSW with Exhilarates (2019 Magic Millions 2YO Classic RL) and Farnan (2020 Golden Slipper Stakes Gr.1).  They cost $600,000 and $550,000 respectively from Vinery’s consignments to the Gold Coast Magic Millions and their combined earnings to date total $4.79 million.

By comparison, Artorius was a snip at $120,000 from Vinery (as agent) at the Gold Coast Sale last year.  “He was a bit immature early on,” Sam Freedman recalled.  “I didn’t like him but Dad did and he’s a very good judge of a yearling.

“We gave him time and in the past six months he’s turned into a beast.  Today’s trip (1200m) is probably short of his best in terms of distance.  He’s a valuable colt now and will be a Guineas horse in the spring.”

Perry bred Artorius by using Flying Artie over his unraced Redoute’s Choice mare Gracie’s Lass.  He kept faith and stayed in when the Freedmans started syndicating the colt on the Gold Coast.

Second-dam Grace And Power (More Than Ready) arrived in Australia after a successful career for USA celebrity chef Bobby Flay winning the 2007 Holly Stakes LR at Meadowlands and running second in the Starlet Stakes Gr.1 at Hollywood Park.

Perry bought her from Kentucky-based Denali Stud whose graduates include Uncle Mo, Stravinsky, Animal Kingdom, Royal Academy and Ipi Tombe..  “It wasn’t a small amount but she’s been worth it,” he said.  “More Than Ready mares are worth their weight in gold!”

Another promising More The Ready filly is his lightly-raced homebred Patino Ruby who was an eye-catching first-up winner at Scone on Tuesday.  Trained by Brett Cavanough, the 3yo filly cruised to an early lead and then toyed with the others in the Exceedance At Vinery Class 1 Hcp (900m).

Patino Ruby is bred in the purple and is an unmistakeable More Than Ready.  She won a Muswellbrook maiden during a short spring prep and she will go out for another break after taking the next step at Scone.

Her dam Commanding Jewel (Commands) won a Thousand Guineas Gr.1 for Perry and is a half-sister to Champion Australian filly Atlantic Jewel (Fastnet Rock).  “I breed from around 30 mares and usually sell most of their progeny,” Perry added.  “I do retain some of the fillies to keep the bloodlines going and that’s why we kept Patino Ruby.” 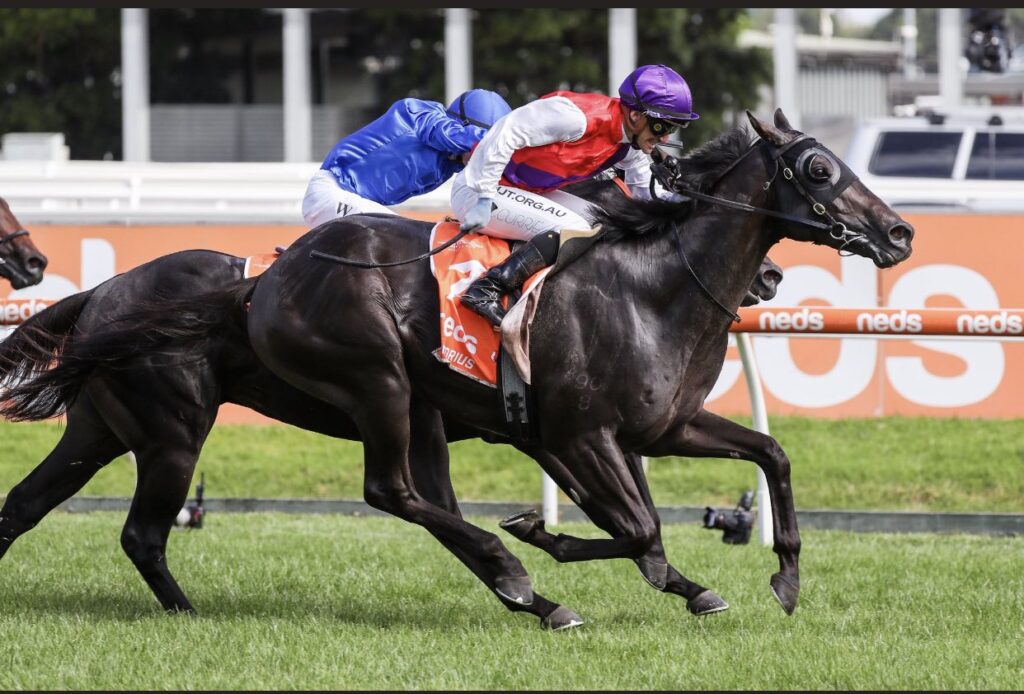