Scenic Lodge was the main beneficiary when racing resumed in Perth after the current heatwave saw Ascot’s Saturday program held over following a 40 degree forecast.

The Muchea nursery dominated the first half of Monday’s meeting with a Universal Ruler double (Uni Queen & Rulelee) and a Snippetson single with Spin The Knife who is on track for the $200,000 Magic Millions 3YO Trophy at Pinjarra on February 5.

“We have eight by Snippetson and five by Universal Ruler,” Scenic Lodge general manager Jeremy Smith said.  “In saying that, there’s more diversity than last year including a couple of good-sized, well-bred fillies by Magnus.  The Perth market loves Magnus.”

Scenic Lodge sold the top-priced filly at the 2021 Perth Magic Millions, a $200,000 Snippetson from Pearlesque, and returns with her half-brother by Universal Ruler (Lot 7).  “He kicks off our draft and another $200,000 would be a good start,” Smith admitted.  “He’s a quality colt from a black-type family.”

Pearlesque (Statoblest) has thrown a Stakes winner (Friar Fox) and a Stakes performer (Friaresque) by Blackfriars and an Ascot-winning full-brother (King Cruzer) by Universal Ruler.

The other Universal Ruler that Smith mentioned is the colt from Crystal Gardens (Lot 111).  “He’s bigger and stronger than his half-brother by Snippetson that we sold for $100,000 last year.”  That colt was purchased by agent John Chalmers on behalf of Bill Godecke and, appropriately, has been named Bill Selects.

Godecke was a legend at Gloucester Park before crossing over from harness racing to the gallops.  He owned and trained 2015 Kalgoorlie Cup winner Woodsville who was by Scenic Lodge legend Blackfriars.

Among the Snippetsons, Smith rates Lot 58, his filly from True Storm.  “The dam won six sprints in Perth and this is her best foal to date.  She’s correct and it’s a fast family with this season’s Burgess Queen winner Buzzoom close up.

“The Snippetson – Diamond Card colt (Lot 288) somehow slipped through the cracks into Book 2.  He looks a fast, early-maturing 2yo for next season.  It’s a great page.  The dam is a half-sister to Karuta Queen.”

A Zoustar – Karuta Queen filly topped Day 1 of the Gold Coast Magic Millions a fortnight ago when making $950,000 to the bid of Peter Moody.

Scenic Lodge purchased Snippetson from the Hunter Valley to sire precocious stock that train on and the former Widden Stud resident has kept his side of the bargain with Tinsnip (G3 WA Sires’ Produce Stakes) in his first western crop, Gemma’s Son (RL Magic Millions 2YO Classic) in the second and Spin The Knife (4 wins from 7 starts) in the third.

His latest 2yo crop is about to take off with three winners at last week’s Belmont barriers trials – Hot Chatter, Snippagent and Spiritson who defeated another unraced Snippetson named Compak.

Spin The Knife was the first-leg of a unique double for Mitch Pateman on Monday.  The popular jockey, whose family is steeped in racing on both sides of his pedigree, announced his retirement after piloting the Luke Fernie-trained sprinter to victory in the Crown Perth Plate (1100m).

A little over two hours later, Pateman opened his account as a full-time trainer with Dawson Stud-bred mare This’ll Testya (Testa Rossa) in the Vale Dr Joe McDermott Hcp.  “It’s probably my best moment in racing,” he told Ernie Manning of The West Australian Newspaper.  “I teared up after winning on Spin The Knife but I was even more emotional as a result of the mare’s win.”

Fernie was delighted to play a part in Pateman’s final winner in the saddle.  “Mitch has always been a show-off,” Fernie joked.  “He’s been a good mate for a long time and I’m glad this horse has helped make his riding retirement so special.”

A premiership-winning trainer of the future, Fernie was also impressed with Spin The Knife’s all-the-way, first-up victory while at a loss to explain why he drifted from $1.75 to $2.80.   “He’s a super horse and was on a Winterbottom Stakes campaign earlier this season.  I knew he would deal with that mob pretty easily today and it was a good trial for the Magic Millions Trophy next month.”

Spin The Knife was bred and sold by Scenic Lodge for $55,000 at the 2020 Perth Magic Millions.  His dam Zany Lady (Zeditave) is from the black-type family of G2 Champion Fillies Stakes winner Mercurial Madam (Is It True) and she foaled a Snippetson filly in August.

Buyers who cannot attend the Perth Magic Millions Sale can bid with confidence through accredited on-site bloodstock agents at the Swan Valley sale-ground. 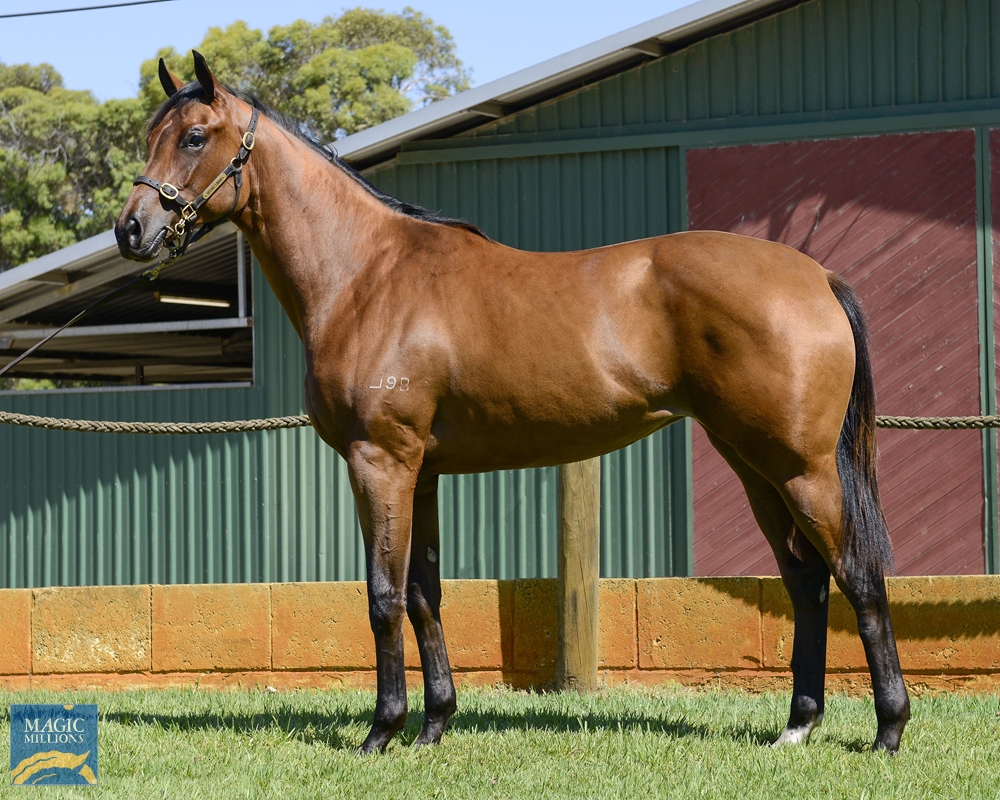