Babylon Berlin became the 21st Stakes winner for All Too Hard and his second in the New Zealand with a commanding victory in the Cambridge Breeders’ Stakes Gr 3 on Saturday.

The Ben Foote-trained 3yo filly made every metre for Samantha Collet and closed the race as a contest when lengthening to a five-length lead at Te Aroha.  She was looking for the line at the end of 1200m to score by a length from No Filter (Toronado) with another five panels to Shezzacatch (Savabeel).

Vinery champion All Too Hard has sired three Group 1 winners this season and Foote predicted Babylon Berlin will also be given a chance at the elite level.  “We will be trying to secure a Group 1 win here in New Zealand then I think her future would lie in Australia.

“I do think she will be able to stretch out in distance but we won’t overdo things when she kicks off as a four year-old.  She has the knack of getting her rivals off the bridle without putting pressure on herself.”

All Too Hard has a 65% winning strike-rate in NZ.  His first-crop miler Demonetization struck again at Group 2 level in the Easter Hcp (1600m) at Ellerslie last Saturday.

All Too Hard unearthed another 3yo with potential on Saturday when Too Much Caviar bolted in at Newcastle.  At just his second start, the Gai Waterhouse & Adrian Bott prepared gelding put more than four lengths on his rivals in the Red Funnel Maiden (1400m).

“One can simply never have Too Much Caviar,” Gai tweeted.  “Led from pillar to post and despite some mid-race pressure, he still forged clear.  Exciting times ahead for this son of All Too Hard.”

Too Much Caviar carries the All Too Hard – More Than Ready cross and was an $85,000 buy for Blueblood Thoroughbreds at the 2019 Gold Coast Magic Millions from Gerry Harvey’s Westbury Stud.

His dam More Caviar is a daughter of Gai’s Group 1 winning mare Lotteria.  She won an ATC Flight Stakes and VRC Myer Classic and was runner-up to Makybe Diva in a memorable 2005 MVRC Cox Plate. 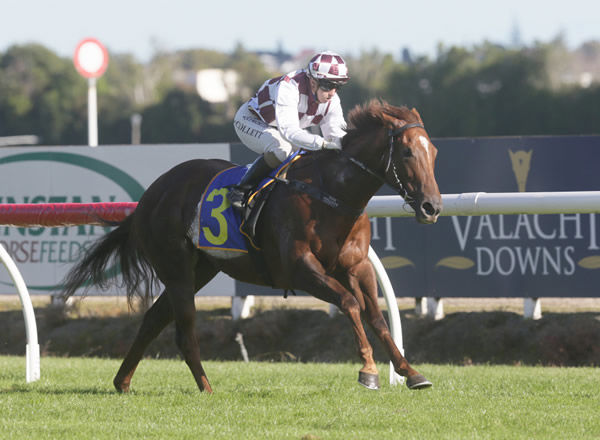