All Too Hard mare Babylon Berlin welcomed the drop from Group 1 company to outclass a strong field in the Concorde Stakes (Gr.3, 1200m) at Ellerslie on Saturday.

The Ben Foote-trained sprinter had finished a good third in the Railway Stakes (Gr.1, 1200m) on New Year’s Day and was always in control after crossing to the lead in the first furlong.  Her rivals chased in vain as she lengthened to a winning lead at the top of the straight under Michael McNab.

Babylon Berlin started a short-priced favourite to improve her black-type record which includes the Cambridge Breeders Stakes Gr.3 at Ellerslie and Pegasus Stakes LR at Riccarton.

“She fought on really well and is probably learning how to be a racehorse now,” Foote said.  “She got to the front quite easily as we didn’t expect to lead with Iconic Star in the race.  I said to Michael to ride her how you find her and they produced a great result.”

Babylon Berlin has now won 6 of her 14 starts for a syndicate that includes her breeder Scott Williams and Kim Rogers, Sam Beatson, Cedric Foote and Andrew Stuart.  She’s the final foal of You Can’t Say That (Fusaichi Pegasus) who is also the dam of Darci Be Good (Hawkesbury Cup Gr.3).

McNab was thrilled with how his plan panned out.  “She was a bit slow away in the Railway and that messed up our race,” he said.  “I wanted to lead and when she got out so well I was really happy.  She kicked really well and normally the last 150m is her weakness but she was really strong today.”

Babylon Berlin’s residual value is already assured with a black-type pedigree on both sides of the Tasman.

Second-dam What Can I Say (Khozaam) was a Group 3 winner in NZ (Mapperley Stud Stakes) and Group 2 in Australia (Warwick Stakes).

All Too Hard attention turns closer to home next week with the return of Behemoth in Adelaide and the Inglis Classic Yearling Sale in Sydney.

Behemoth starts first-up in the Durbridge Stakes (LR, 1200m) at Morphettville on Saturday ahead of another autumn tilt at the $5million All-Star Mile at Flemington on March 19.  He won last year’s Durbridge by three lengths as a long odds-on favourite and finished third in the All-Star Mile behind Mugatoo and Russian Camelot.

Jockey Kayla Crowther confirmed he felt as good as ever during a recent hit-out in company at Strathalbyn.  “It was a beautiful gallop,” Crowther said.  “His action is terrific and he really towed me up the hill last Sunday.  I thought the other horse would challenge him a bit but he cantered past like a class act.”

All Too Hard has 14 lots at the Inglis Classic Yearling Sale and Vinery’s three yearlings will parade at Riverside Stables midway through the second session on Monday, February 7.

The All Too Hard – Champagne Ready filly (Lot 454) is from a three-quarter sister to last year’s Gold Coast Bracelet LR winner Grace And Harmony.

The filly out of Cubana Moss (Lot 485) is a half-sister to five winners including the Brett Cavanagh-trained Star Boy (Pluck) who just missed a black-type strike in the Ramornie Hcp LR at Grafton.

All Too Hard’s colt from Dayeala (Lot 491) is a half-brother to Much Much Better (Sebring) who was a graduate from Vinery’s draft to the 2020 Inglis Classic Sale.  He has earned over $280,000 after wins at Randwick (2) and Newcastle last year for Viribright Racing and trainer Gary Moore. 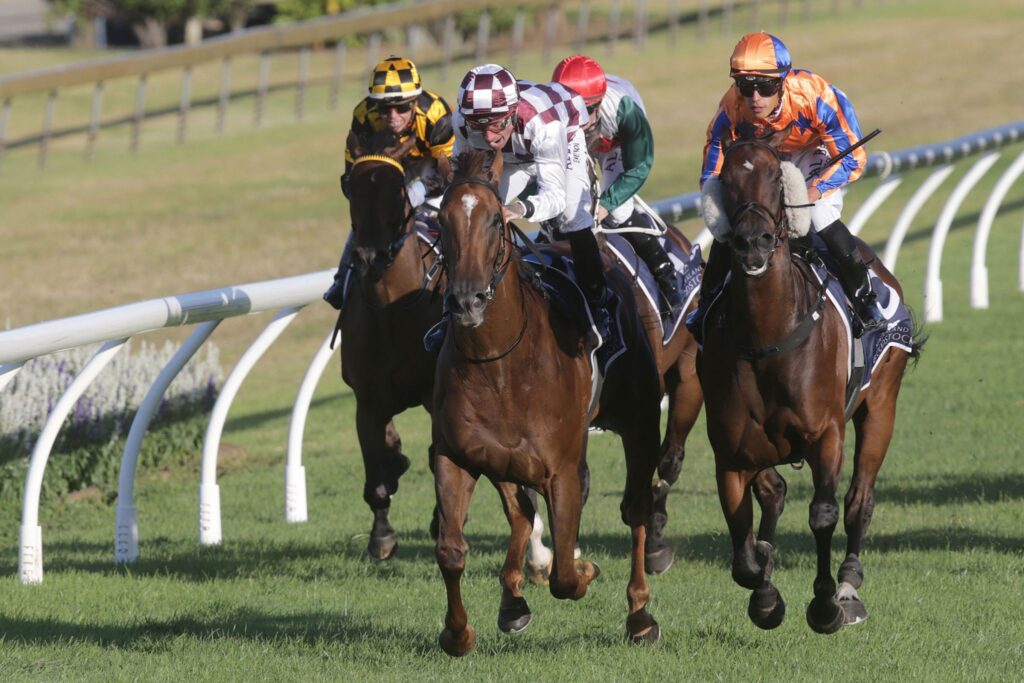