Bam has won his fourth race in 10 starts for trainer Dennis McMahon and Geisel Park sire All American at Balaklava.

The improving miler gave jockey Jason Potter an easy winning percentage in the Coopers Hcp (1600m) on Wednesday.  “There was no pace on paper so when they steadied I decided to go to the front.  He’s a lovely, big horse and kept finding to get the job done.” 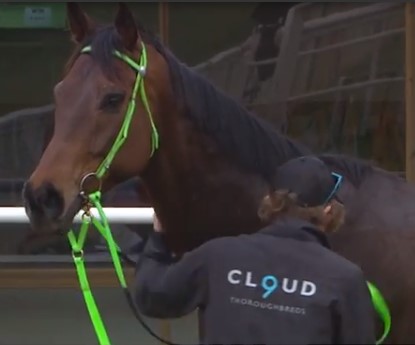 Bam (pictured) graduated from the 2016 Magic Millions National Yearling Sale for $45,000 and has been given time while maturing into a giant.

“He stood 17 hands when he arrived from Melbourne last year,” McMahon recalled.  “I tipped him out for a spell and when we got him back he was 17.2 hands!

“He’s a beautiful animal and I told the owners he will be winning up to 2000m this time in.”

The Deep Impact – Yankee Rose filly was purchased by Kaneko Makoto who raced Deep Impact to the Japanese Triple Crown in 2005.  Makoto, 74, is President of Zuken Inc. a multinational corporation on the Tokyo Stock Exchange.  He also owns the exclusive King Kamehameha Golf Club in Hawaii.

Watch the filly parade before the sale here