Universal Ruler is a country mile ahead of the WA 3YO sires’ premiership and he went further ahead when Zephyr Queen won the Sir Matt Busby Hcp (1300m) at Belmont on Wednesday.

Zephyr Queen camped outside the leader and then found another gear to grab My Fair Lady passing the furlong pole.  The Jim Taylor-trained filly has won 4 times in 7 starts this year since a York maiden in January.

“She can be a sook caught up in the field but grows a leg when allowed to roll along in the clear,” Taylor explained.  “She only cost $9,000 as a yearling and has already won 10 times her purchase price.”

Taylor prepares her for a syndicate that includes his wife Tina and mother Lois.  The owners would have been happy to collect an $11,000 Westspeed bonus on top of the midweek prizemoney and she was also over the odds at $13 despite a last-start victory over Mankind.

“She was comfortable on the speed but then came off the bit at the 600m,” jockey Chloe Azzopardi reported.  “I had to give her a dig and she was doing her best work at the furlong before motoring home.”

Universal Ruler is also making a late play for the WA active sires’ premiership this season.  He’s within $50,000 of his Scenic Lodge colleague Snippetson with a fortnight remaining in 2018-19. 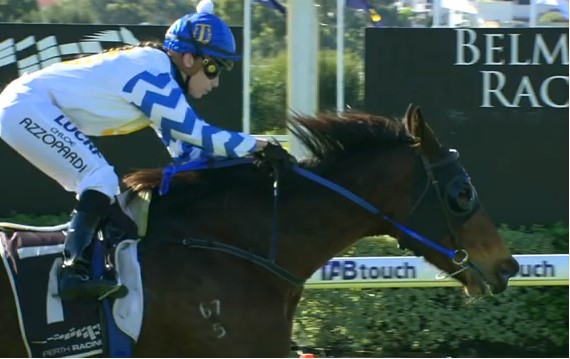