Yarradale Stud stallions War Chant (USA) and Gingerbread Man shared a city-winning double with a couple of unlikely allies at Belmont on Wednesday.

The first is youngster just starting out on a promising career while the other is an old-hand not long rescued from retirement.

War Gem (War Chant) had blinkers fitted first-up and he speared through a gap to defeat odds-on favourite Prince Ragnar (Snippetson) in the Crown Perth Maiden (1000m).  The 3yo colt had been trialling well after going shin-sore on debut at Ascot in March.

“He’s still a bit new but took up a good position and had the guts to take that run when it presented,” Steve Parnham said.  “He really hit the line and to sprint home like that was very encouraging.  He’s looking for more ground than 1000 metres.”

War Gem was posting the third Belmont win in a week for War Chant following Blue Horse and Strathmore Rose.  Parading like a particularly smart type in the enclosure, he was bred and sold by Yarradale Stud’s Ron Sayers for $170,000 at the 2020 Perth Magic Millions and he kept a slice with stable clients of Neville Parnham.

He’s one of four winners from Diamonds’n’dreams (Viscount) and she was bred back to War Chant last October. There’s black-type right down the page through second-dam Dreamworks (G2 NZ Royal Stakes) and third-dam Slanchyvah (LR Doomben Classic).

Revitalised stayer Axel ‘R’ Eight (Gingerbread Man) filled out the double after a long time between drinks in the Morley Growers Market Hcp (2100m).  It broke a Perth drought going back nearly three years and trainer Darren McAuliffe revealed he did contemplate retiring the 6yo gelding last month.

“He has brittle feet and they bruise easily,” D.Mac explained.  “It’s been a nightmare and I finally told the farrier no more bar shoes because he’s constantly pulling them off.  We used an old trick I learned a long time ago and it worked!  They’re a lot better now.”

Axel ‘R’ Eight is a homebred for a partnership managed by Ian Rothnie of Pinjarra Thoroughbreds.  His dam Axes ‘N’ Taxes (Mossman) was purchased unraced by Rothnie a decade ago for $1,750 at a Perth Magic Millions Autumn Sale.  In ten seasons at stud, the mare been covered five times.

Hoofnote:  City Place (USA) added another notch for Yarradale at Pinjarra on Thursday when his mare Arracity won the TABtouch Better Your Club Hcp (1200m).  She is trained by Brian Kersley for Roselee Park’s Tracy Rodwell.

Arracity is from the second of four crops sired by City Place (Storm Cat) at Gidgegannup between 2014 and 2107.  Her dam Arrasene (Fastnet Rock) has a yearling colt by Roselee sire Jimmy Choux (NZ) and was bred back to him last October. 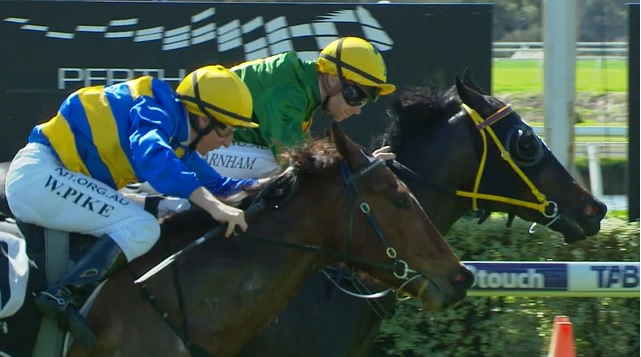