Goldfields owner-breeder Keith Biggs had a nickel moment over 50 years ago and he can hit the headlines again with Minsk Moment at this year’s Brisbane carnival.

Biggs bred Minsk Moment and kept a share after selling him to a Coolmore Stud syndicate for $575,000 at the 2020 Gold Coast Magic Millions Yearling Sale.  The 3yo colt has several winter options after bursting out a pocket to blow his rivals away in the Treasury Quality (1300m) at Eagle Farm on Saturday.

Minsk Moment had won a Canterbury nursery on debut last January and then scored first-up in a Moonee Valley 3yo Quality in September.

He’s a son of Champion Australian Sire I Am Invincible and a Group 1 like the Stradbroke Hcp would send his value into the stratosphere on a Coolmore stallion roster of the future.  “He’s an exciting young horse but didn’t like the wet tracks in Sydney,” trainer Chris Waller said.  “That’s why we brought him north to show his best.

“We will talk to Jim (Byrne) and see what he suggests but he should fit into some of the better races up here.”

Byrne followed Release The Beans in transit and was surprised when that horse didn’t take him into the race.  “He had a soft run but didn’t let down,” Byrne said.  “I had to get on the back of his stablemate but they didn’t open up so I just had to jockey my way through.”

“He really attacked the line strongly and stepping up distance will help.”

Biggs bred Minsk Moment by sending his Perth Group 3-placed mare Dancing Express (Oratorio) to Yarraman Park for a cover to I Am Invincible in 2017 when his fee was $110,000.  It’s double that now but Biggs was happy to send her back to ‘Vinnie’ this season.

He has a Group 1 CV going back to 1984 when Moss Kingdom landed the Perth Cup with leading apprentice Jimmy Taylor in the saddle.

Biggs won the Perth Cup again with Zamlight (1991) and Palatious (1994) and then went to a completely different level with Doriemus in the Caulfield and Melbourne Cups of 1995.

Biggs was at the epicentre of the Nickel boom that was heard around the globe in 1969.  He invested $25,000 into Poseidon shares that within six months escalated from 45c to $280. 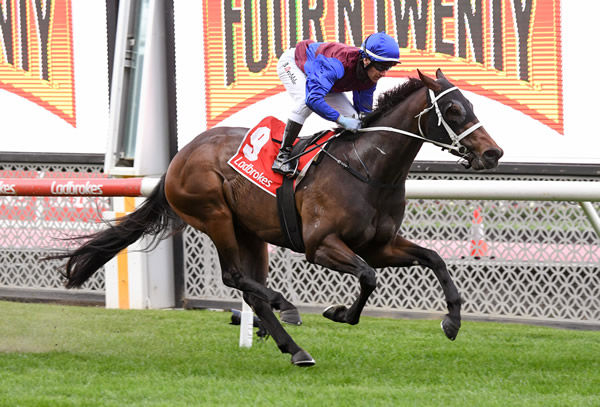