Scenic Lodge champion Blackfriars has claimed a 10th WA sires’ premiership in a row and, like most of his titles, he doubled the prizemoney of the next best stallion on the ladder.

“We are so proud of what he achieved,” Scenic Lodge’s Jeremy Smith said.  “He was an amazing horse and he can add another couple of premierships because his two year-olds have never been a significant factor in all those years.”

Blackfriars (Danehill) joined the Muchea stud’s roster when it was known as Durham Lodge.  The name changed to Scenic Lodge in August 2012 to honour its foundation sire who won 9 consecutive WA titles between 2002 and 2010.

“Scenic climbed to No.2 in Australia at one stage,” Smith recalled.  “It’s hard to believe, but we’ve won 19 WA sires’ premierships in a row.”

Snippetson is the leading active sire in the west and there’s every chance he could take over the mantle when the numbers begin to dwindle for Blackfriars.  “That’s why we bought him over here,” Smith added.  “We purchased him off Widden Stud and his first two crops have produced the top two year-olds Tinsnip and Gemma’s Son.”

Burning Pride was the first winner of the new season for Blackfriars when landing the Crown Perth Hcp (2100m) at Belmont on Saturday.  And Holly Taylor became the third trainer to prepare the 6yo mare for a win in town.

Taylor joined Ken Adams and Grant & Alana Williams who have all contributed in the mare’s overall record of 7 wins in 28 starts for over $200,000 in prizemoney.  “I already knew her from the days when I pre-trained for Grant and Alana,” Taylor recalled.  “Willie rode her quietly and then brought her home late.  She’s a tough little mare and never gives up.”

Pike has been aboard Burning Pride in every win starting with a Belmont juvenile in July 2017 and they added some silverware in this year’s Narrogin Cup.

Burning Pride was bred by De Grey Park’s Dick Vincent from Pride (Hussonet) who is related to Singing The Blues (G1 Oakleigh Plate) & Summer Swallow (LR Bunbury Breeders’ Classic).  Her final foal is a 2yo filly by King’s Troop. 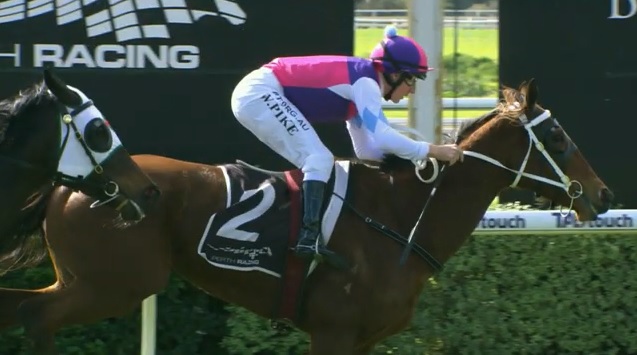