Awapuni trainer Lisa Latta is praying for blues skies when Lincoln Hills steps up to Group 1 company in the NZ 2000 Guineas (1600m) at Riccarton on Saturday.

The All Too Hard colt doesn’t like wet tracks and the forecast is for scattered showers clearing to a partly cloudy morning on raceday.  “He travelled down well and has settled in without any problems,” Latta said on Friday morning.  “The surface should be firm enough for the Guineas.

“He’s struck soft or heavy tracks at his last four starts and we’ve added blinkers to sharpen him up tomorrow.” 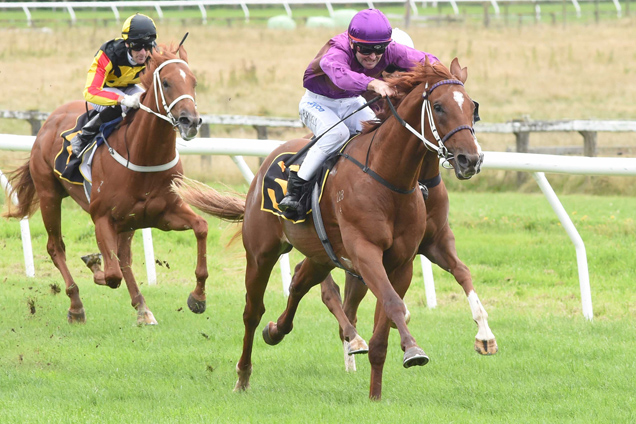 Lincoln Hills (pictured) is peaking after doing his best work at the finish of 1400m preps at Hastings and Te Rapa last month.  He made up ground when 5th in the Hawkes Bay Guineas-Gr.2 and then came from the second-half, after a slow getaway, for a creditable 4th in the Sarten Memorial-Gr.2.

Latta targeted Saturday’s classic after he won at Tauherenikau in March.  “We’ve been patient because we knew he was only going to get better as a three year-old,” she explained.  “Jonathon (Riddell) jumped off after that win and said he felt like a top colt for next season.”

Lincoln Hills (3c All Too Hard – Hickory Hills by More Than Ready) was bred in Australia at Baramul Stud and his dam is an unraced half-sister to Gerry Harvey’s Adelaide stakes winner Zauberin (Zabeel).

Latta and Lincoln Farms owner John Street won the 2014 NZ 2000 Guineas with Platinum Witness and their chance of a repeat rests with the stylish chestnut who was a bargain $55,000 buy at the 2016 Magic Millions National Sale.

All Too Hard is coming off a successful Flemington carnival with Connoisseur Stakes-LR winner All Too Huiying and Desirable Stakes-LR placegetter Warranty.  He stands for a $44,000 (inc gst) service fee at Vinery.

Last-start winner Demonetization is another Kiwi-based All Too Hard colt with Group 1 potential.  The Nigel Tiley-trained 3yo was a very impressive at Pukekohe last month and his next start will be at Tauranga on November 18 with long-range plans focused on the NZ Derby-Gr.1 in March.