Gary Moore reckons he can win next year’s Australian Derby-Gr.1 with All Too Huiying after watching the All Too Hard colt score a courageous victory at Flemington on Thursday.

Moore set All Too Huiying for the Connoisseur Stakes-LR over 1800m on VRC Oaks day after wins at Wyong and Hawkesbury and he was confident of a hat-trick despite a $31 pre-post quote.

“He kept finding when they challenged him in front,” Moore declared.  “That’s the kind of horse you want and I’m so happy for All Too Hard and Vinery Stud because they’re great people.

“He was Group 2 placed at the Brisbane winter carnival and is a pretty classy animal,” Moore added.  “He’s very laid back and there’s no issues about him staying the distance of the Australian Derby.”

All Too Huiying (3c All Too Hard – Madam Flurry by Perugino) controlled the race from an outside barrier although it wasn’t all plain sailing according to jockey Michael Walker.  “He was off the bridle and didn’t really dig in until he saw the others coming.  He’s got heaps of improvement and is going to be a serious horse when he puts his mind on the job.

“Gary’s definitely got a good one on his hands!”

Moore will consult with the owners before deciding whether to back up in the $300,000 Sandown Guineas-Gr.2 on November 18 or send him straight out for a spell.

All Too Huiying is a half-brother to Group 1 star Good Journey and was a $150,000 buy for owner Amy Feng at the 2016 Adelaide Magic Millions when offered through the Mill Park consignment.

He is the latest stakes winner by All Too Hard who also had Team Hawkes filly Warranty earn black-type in the Desirable Stakes-LR at Flemington on Cup day.  And David Payne believes All Too Soon can develop into an Australian Oaks-Gr.1 candidate on the strength of her victory at Randwick on Tuesday.

All Too Hard stands at Vinery for a $44,000 (inc gst) service fee and the Connoisseur Stakes prizemoney sent his earnings through $1 million this season. 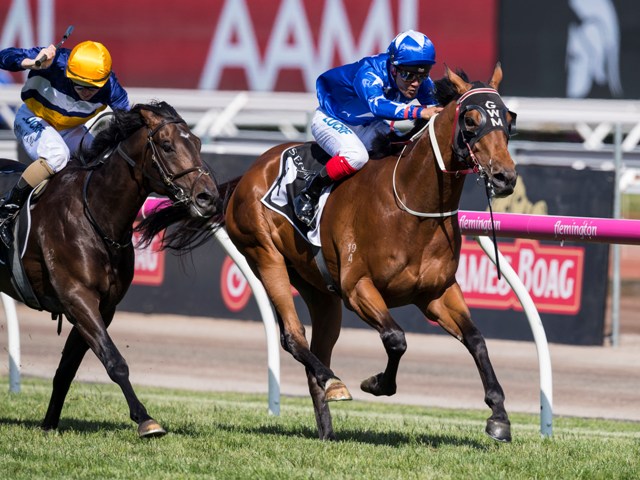