Brazen Beau (I Am Invincible) responded in kind to the consummate skills of Joao Moreira to win Australia’s premier sprint from the three highest-rated sprinters in the world – Chautauqua, Terravista & Lankan Rupee.

He will retire to Darley’s Seymour base later this year but not before a northern hemisphere assignment targeting the G1 Golden Jubilee in June.  “We were delighted to secure Brazen Beau for stud,” Darley’s Australian managing director Henry Plumptre said.  “We identified him as a top class colt in the spring.  He’s a powerful type and will be a popular addition to our roster at Northwood Park.”

Brazen Beau won the G2 Roman Consul Stakes in Sydney and the G1 Coolmore Stud Stakes at Flemington during the Melbourne Cup carnival.  “It was no surprise to us when he won the Coolmore so impressively,” Plumptre explained.  “He will underline that ability at Royal Ascot.”

Plumptre remembered champion sire Bletchingly when assessing the stud potential of Brazen Beau.  “I cared for Bletchingly at Widden Stud,” he said.  “This colt reminds me of him in so many ways.”

Trainer Chris Waller was not buying into any arguments as to the current world rankings after his colt demoralised the small but select field down the straight.  “I will leave that for others to judge – I only train the horse that just won a very competitive race.”

Brazen Beau was sold to Sheikh Mohammed before his autumn campaign, however, the colt still races in the gold colours of his original owners Ontrack Thoroughbreds.  He is a son of champion sire I Am Invincible from Black Opal Stakes placegetter Sansadee.

“He’s got the speed at the front and the back end of a race,” Waller said.  “The Newmarket was a target and he’s achieved that.  I think he’s a very special horse with a very special ability.” 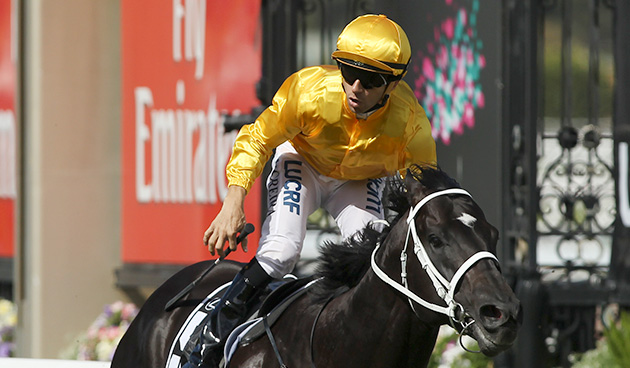