More Than Ready (USA) is on the brink of another record-breaking achievement at the Breeders’ Cup Championships on Friday and Saturday.

The Vinery legend joined Sadler’s Wells and Unbridled’s Song as the most successful stallions in Breeders’ Cup history when Roy H. won the 2018 BC Sprint at Churchill Downs.  The trio have been credited with six wins and More Than Ready can go clear with multiple entrants this year.

Hit The Road is the first More Than Ready in action at Santa Anita on Friday in the Breeders’ Cup Juvenile Turf Gr.1 (Sat 7.52am AEDT).  He was a last-to-first winner of the Zuma Beach Stakes LR at Santa Anita on October 6 and trainer Dan Blacker is confident there’s more improvement to come at his home track.

“He had to miss the Del Mar Juvenile with a cough but he recovered and has kept maturing all summer.  He’s got the mind of an older horse and I’m just thrilled going in as a chance with this colt.”

Royal Ascot Coventry Stakes Gr.2 winner Arizona is the $3 favourite while Hit The Road is quoted at $14.

“Fortunately, over the years, we’ve had a lot of fillies – all a little bit different individually – but horses that really fitted the race,” Brown said.  More Than Ready sired his 2017 winner Rushing Fall and last year’s winner Newspaperofrecord races in the same Klaravich Stable colours as Selflessly.

More Than Ready rounds out Friday with Scabbard in the Breeders’ Cup Juvenile Gr.1 (Sat 10.03am AEDT).  He is the $5 second-favourite behind Dennis’ Moment ($2.40).

Scabbard won on debut at Churchill Downs and followed up with seconds in the Saratoga Special Gr.2 and Iroquois Stakes Gr.2 at Churchill Downs.  He got within a length of Dennis’ Moment under the Twin Spires after striking trouble on the home turn.

“I think he will fit very well in the Breeders’ Cup Juvenile,” trainer Eddie Kenneally said.  “He was brave after getting shuffled back.  Take nothing away from the winner but to come on again proves he’s a very nice horse.”

Chad Brown returns on Saturday with British-bred Uni in the Breeders’ Cup Mile Gr.1 (Sun 9.20am AEDT).  The More Than Ready mare has opened at $5.50 in a wide-open BC Mile.

Uni had earned a free berth into the BC Filly & Mare Turf (2000m) off a spectacular victory in the First Lady Stakes Gr.1 at Keeneland but Brown elected to stay at her pet trip of 1600m.

“It wasn’t a tough decision even though we know it’s going to be a tougher race than the First Lady,” Brown noted.  “Yes, it’s facing males again, but that’s really her distance.  She has an incredible turn of foot and is really on top of her game right now.”

More Than Ready is also favoured to add another new stakes winner to his tally when 2yo filly Power Move steps out as a $2.60 public-elect for the Tempted Stakes LR at Aqueduct on Friday.

Power Move won on debut over 1200m at Belmont Park on October 6.  She is a homebred for the Phipps family and certainly looked like a horse that will appreciate 1600m at Aqueduct.  “I hope she can sit and be patient,” trainer Shug McGaughey said.  “I think if she breaks good, she ought to be in the right spot.” 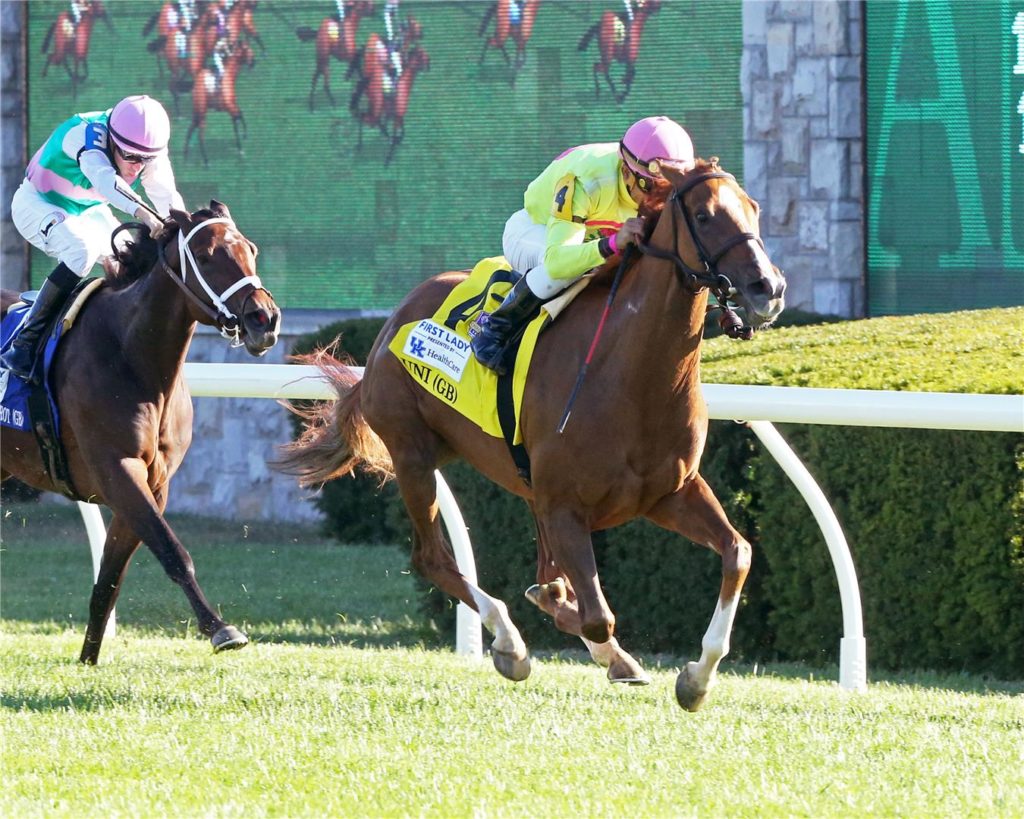