Dash For Cash stayer Dodging Bullets is on a lucrative hat-trick after a last-stride victory in the $103,000 Kyneton Cup (2000m) on Wednesday.

“The hard track and the slow pace didn’t suit him but he was too good on the day,” Wilde said after the narrow win over fellow Warrnambool galloper Moonovermanhattan.  “He is in a rare patch of form and is a really good horse.  He’s as tough as they come and is repaying the owners that’s for sure.”

Jockey Daniel Moor was full of praise for the way in which the winner knuckled down in the final stages.  “Darren Weir’s horses are awfully hard to beat at the best of times, especially when they’ve cantered in front.  He came off the bit a long way from home and took a long time to hit top gear at Moonee Valley last time.

“He travelled in hand one out, one back today and was strong to the line.”

Dash For Cash sprinter Andaz was far from disgraced when coming from the rear of the field to be beaten less than four lengths in the G1 Coolmore Stud Stakes on the opening day of the Melbourne Cup carnival.  He will appreciate the drop back in grade when tackling the LR Emirates Airline Hcp (1400m) at Flemington this Saturday.

Trainer Chris Waller has nominated Andaz for the G2 WA Guineas (1600m) at Ascot on November 25. 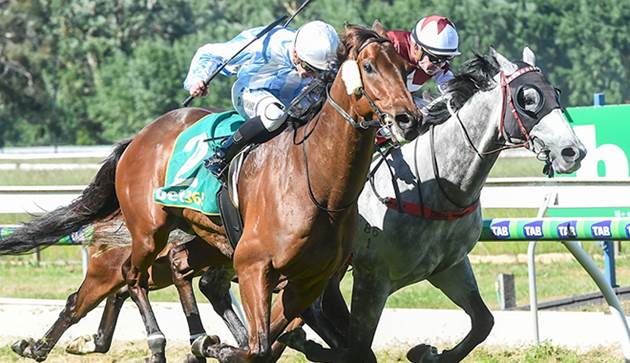