Playing God sired another city double on Saturday when Fiery Water and Comfort Me gave punters a profitable start at Belmont.

They both won like short-priced favourites should for their sire who starts covering his latest book of mares at Darling View Thoroughbreds next week.

Fiery Water (4g Playing God – Palace Alice by Palace Music) broke through in the Go Racing Before The Footy Maiden (1200m) for Adam Durrant and Jade McNaught.  He raced in traffic until the home turn and then let down for a comfortable victory over Enduring Moment (Toronado).

“Adam thought he would be up with the leaders but they all wanted to go forward so I slotted in behind the speed,” McNaught said.  “He picked up the bit on the corner and then balanced up like a smart horse.  He’s still a bit green and wanted to lay in but got the job done.”

Fiery Water was bred and sold by Mungrup Stud for $52,000 at the 2018 Perth Magic Millions.  He’s bred to keep improving over longer journeys being a half-brother to Lords Ransom (G2 Perth Cup) and Palace Intruder (LR Aquanita Stakes).

Comfort Me was just as impressive winning the TABtouch Westspeed (1400m) for trainer Rhys Radford and owner-breeders Frank & May Edwards.

A Bunbury maiden winner in February, he had been placed in all three starts since resuming from a spell last month.  “I’ve got a bit of time for this horse,” Radford said.  “We changed tactics and gear and he’s starting to relax in his races.  He will be even better getting up over a mile.”

Comfort Me (4g Playing God – Southern Comfort by Comfy) is a full-brother to Son Of Bacchus who also started his career with Bunbury maiden win for the stable.  He went on to return a cheque in every one of his 14 starts last season.

Playing God (Blackfriars) is running at a 62% winning strike-rate with three crops racing and he stands for a $13,200 (inc gst) service fee at Darling View Thoroughbreds. 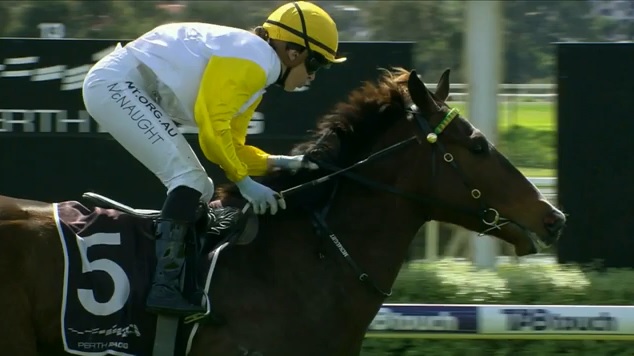