Vlad Duric made a winning return from England when he piloted Ocean Crossing to an impressive maiden victory at Kranji on Friday evening.

Ocean Crossing came with a well-timed run to nab runaway leader Grand Choice in a performance that impressed Duric.  Singapore’s two-time champion jockey was back at Kranji after partnering Lim’s Cruiser (Casino Prince) in the Diamond Jubilee Stakes Gr.1 at Royal Ascot.

Duric steered him home with a quick turn of foot to win at the fourth time of asking over 1200m.  “He’s genuine and really wanted to win tonight.  He ran a very good trial the other day and I was happy to be on the horse tonight.”

Ocean Crossing (3g All Too Hard – Ocean Bridge by Dolphin Street) was still learning during his initial campaign when partnered by Ben Thompson.  Trained by Lee Freedman, he was placed on debut in February but was beaten six lengths at his next two starts before a spell.

Before travelling to England, Duric had won on stablemate Jomo, another Aussie expat by All Too Hard.  “You can’t put a price on that experience at Royal Ascot,” Duric said.  “It was great to see how things are done over there.”

All Too Hard is charging towards a record-breaking season in Australia and he’s also siring winner after winner overseas.  Ocean Crossing joins last-start Kranji winner Hardcore among an off-shore count of 24 winners of 48 races.

His stakes placed filly Illuminaire increased the wins column to 178 in Australia this season when she prevailed for trainers Leon & Troy Corstens at Echuca on Saturday.  Vinery stands All Too Hard for a $27,500 service fee. 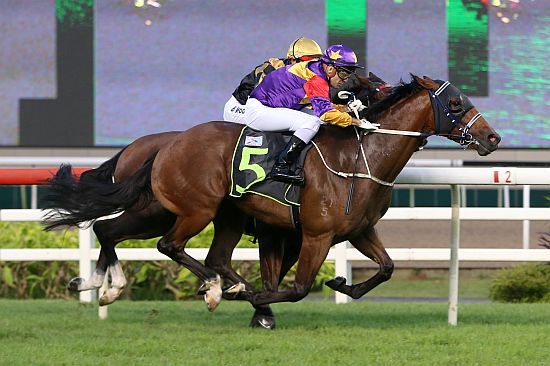